Today's Top Stories
1
Could This Be the Last Year of Roe v. Wade?
2
The Inaugural Concert Was a Cheesy Balm
3
Listen to the Best New Love Songs of 2021 (So Far)
4
Poet Amanda Gorman's Ring Is Full of Meaning
5
What to Buy From Madewell's Secret Stock Sale
Alexander TamargoGetty Images

Out today, January 18, a new Netflix series on Carmen Sandiego is rewriting Sandiego in an animated series, making her a crime-fighting hero. Gina Rodriguez, who voices Sandiego, fully embraced the role, even posting an Instagram photo Thursday of the star channeling the character IRL. It's a gorgeous, and it's just par for the course for the fearless actress.

Rodriguez initially became a star from the Jane the Virgin series, which is now in its final season. She's moving on to other projects, both in movies (last year's trippy sci-fi film Annihilation and this year's Miss Bala) and on TV. Rodriguez is also directing episodes of Jane the Virgin and Charmed, and is even starting her own production company, as reported in Time. The Netflix series is just the latest in a string of successes for the star.

As reported in Entertainment Weekly, this new Carmen is like "Robin Hood," which is a very different characterization than how I remember (also, now I have the gameshow theme song stuck in my head). Rodriguez told Entertainment Weekly that she loved the '80s game and '90s show and game show.

"My parents are super into education, so learning about geography was great,” she said. "And then for her to be Latina—and voiced [on the series] by Rita Moreno, my queen—it made such an imprint on me." The new series envisions the character's backstory and makes her "multidimensional," says Rodriguez.

Rodriguez posted a teaser photo of her in the new role, captioning the photo "You can call me Carmen" and encouraging fans to #bingeaway. The photo channels Sandiego PERFECTLY, down to the fashionable red trench and red hat.

The series is out on Netflix today. The first-look photos at Entertainment Weekly show the titular Sandiago in similar gear, fighting crime like a badass. 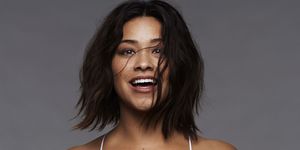