Apparently, Prince Harry didn't get that memo when he was a student at Ludgrove Boarding School. According to Hello Magazine, Harry caused quite the security snafu back in the day, thanks to a GPS error.

Back when Harry and his brother, Prince William, were students at Ludgrove, they weren't away at school on their own like most boarding school students. Being royalty and all, Will and Harry had private security guards who lived on the perimeter of the school's grounds and kept tabs on the young princes. Because these guards couldn't logistically be with Will and Harry every moment of every day, the boys were required to wear GPS satellite tags so their location would always be known when the security team couldn't physically have eyes on them.

It sounds extreme, but they're royal after all. Anyway, royal biographer Katie Nicholl revealed in her 2010 book, William and Harry, that Harry once caused a major panic when he lost his tag.

"It was Harry who triggered a security alert at the school when he lost his GPS satellite tag one evening. Both he and William had been instructed to wear the tags every day so that their protection officers could track them even if they weren’t actually with them. There was chaos when Harry lost his. After several frantic minutes, the device was located beneath the dirty clothes in Harry’s laundry bin."

Harry still has a 24/7 security team, but he was apparently allowed to stop wearing the GPS tag when he turned 17. 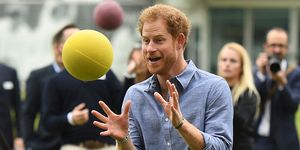 Prince Harry Freaking Loves Tennis Balls
Meghan Markle Is Now Wearing a Prince Harry Ring
Kayleigh Roberts Contributor Kayleigh Roberts is the weekend editor at Marie Claire, covering celebrity and entertainment news, from actual royals like Kate Middleton and Meghan Markle to Hollywood royalty, like Katie Holmes and Chrissy Teigen.
This content is created and maintained by a third party, and imported onto this page to help users provide their email addresses. You may be able to find more information about this and similar content at piano.io
Advertisement - Continue Reading Below
More From The Ultimate Guide to the Royal Family
Why Harry's Memoir Release Date Has Upset People
The Royals Are Worried About Prince Harry's Memoir
Advertisement - Continue Reading Below
Harry Is Putting the Queen in a Difficult Position
Are Will & Kate Sending a Message to Harry & Meg?
Harry and Meghan Reportedly Have a Four-Book Deal
Rare Photos From Diana and Charles' Wedding
Prince George Looks So Grown-Up in New Portrait
Whatever Happened to Archewell Audio?
Prince Harry Is Set to Publish a Memoir
For Prince George Turning 8 Is a Fashion Milestone