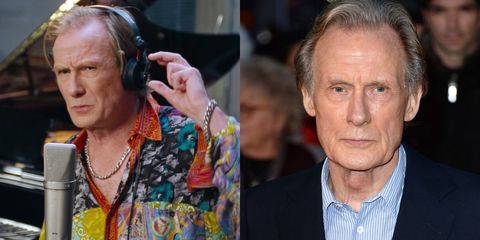 Bill Nighy has revealed that 14 years after he brought rock 'n' roll legend Billy Mack to life in Love Actually, fans still ask him to recite his most infamous line from the movie. (No, not the "festering turd of a record" one.)

When comedian Peter Helliar asked which film quote fans request the actor deliver most often, he immediately quipped: "When I die, if I get an epitaph, it will read: 'Hey, kids, don't buy drugs—become a rock star and people give you them for free!'"

The star also spoke about the Love Actually sequel that recently aired for Comic Relief, which saw the welcome return of cast members including Keira Knightley, Andrew Lincoln, Liam Neeson, and Chiwetel Elijor.

"Well, the big news is I can still get into those trousers!" he said of the slinky snakeskin pair. "And I had to wear some industrial jewelry! And if you asked me how Billy Mack is doing, I'd say he is not in very good shape!"

On whether any of the cast were initially reluctant to return, he added: "Nobody hesitated because it's Comic Relief which has saved millions of children's lives....Everybody is back for it."

The cast recently reunited for a wonderful group photo ahead of the US version of Red Nose Day Actually airing on NBC next month.

A post shared by Entertainment Weekly (@entertainmentweekly) on Mar 31, 2017 at 9:24am PDT