Today's Top Stories
1
How to Help Those Affected by the Beirut Explosion
2
50+ Beauty Products That Will Change Your Life
3
We Should Have Known About J.K. Rowling's Views
4
Cute Ankle Boots to Wear Now and Forever
5
The Oral-B iO Toothbrush Replacing My Dentist RN
Getty Images

Idris Elba went on The Ellen DeGeneres Show to talk about his proposal to fiancee Sabrina Dhowre and his upcoming performance at Coachella this year. But while he was there, he let slip an insanely cool detail from the most-watched and covered wedding of 2018 (and probably the 21st century so far)—a.k.a. Meghan Markle and Prince Harry's royal wedding, of course. Not only did Idris attend, he DJed the event!

Idris laid out the situation for all of us. "So Harry and I have hung out a couple of times through his dad’s [Prince Charles] charity—The Prince’s Trust—which helped me out when I was a young actor."

Idris continued, "I told him nothing and then he asked if I would DJ at his wedding...I was like, is this a joke?"

So, Idris is talking about the wedding reception, not the actual ceremony—which was held at Windsor Castle and was televised, without a turntable in sight. (That would be hilarious, though, if he did DJ the ceremony—imagine the look on the Queen's face??) We know less about the reception except for a few guests Instagramming their outfits and a couple key details, like Meghan reciting a beautiful, meaningful poem. So this is BIG insight into the event.

As a reminder, here's Idris and Sabrina entering the church at the royal wedding (because why not reminisce about that amazing day, I say):

Although he probably changed into something a bit more comfortable for DJing purposes. 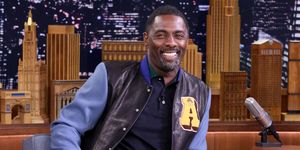