Today's Top Stories
1
How to Donate Money for COVID-19 Medical Supplies
2
Sweatpants You Can Wear From the Couch to Brunch
3
'Killing Eve' Season 3 Review: What's Old Is New
4
Easy Ways to Look Better In Your Next Zoom Call
5
The Struggle to Get an Abortion During COVID-19
Axelle/Bauer-Griffin Getty Images

Priyanka Chopra Jonas is having a phenomenal 2019: The recently married star just appeared in husband Nick Jonas' music video, got gifted a car, and is channeling every chic fashion trend in all her lewks. According to an exclusive from Variety, she's also pushing forward with major causes she supports. It's just been announced she's going to speak at this year's "Women in the World" summit, interviewed by the summit founder Tina Brown.

The event is already packed with superstar women, including Anna Wintour, Brie Larson, Stacey Abrams, and Cindy McCain. Oh and the keynote speaker is Oprah...casual.

Priyanka will likely talk about investing in Bumble (along with other superstar Serena Williams), and her video series “If I Could Tell You Just One Thing,” interviewing incredible women like Awkwafina and Diane Von Furstenburg. She's really been channeling some social causes lately, but who knows: Maybe she'll also talk about life with Nick? (A girl can dream!)

Variety has more deets on what the conference actually covers:

Themes for the summit center on battling misinformation, advancing the #MeToo movement, preserving journalism, and other progressive topics. Wanda Sykes, Judy Gold, and Amber Ruffin will also take the stage together to talk about working in comedy as women in the midst of today’s political climate.

When the hubby goes number one.. the wifey gets a @maybach!! Introducing...Extra Chopra Jonas...haha...I love you baby!! Yaaay! Best husband ever...@nickjonas 😍❤️💋

Okay, is anyone going to this summit and if so can you just bring me along, please? Because this is going to be huge. 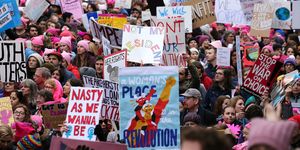