Prince Harry apparently played a game of "desperately dodge the ex" this week at an event in London.

According to The Sun, Harry was originally assigned a seat next to his ex, Love Island star Camilla Thurlow, at a screening of Our Planet that he attended with his dad, Prince Charles, and his brother, Prince William.

Apparently, the event organizers didn't realize that Harry and Camilla had dated (it was like five years ago, but still) and the mistake had to be flagged and corrected at the last second to avoid putting Harry in a seriously awkward position.

“Nobody had realized the link between Harry and Camilla at first. But just before the event, it was flagged up and they had to quickly rearrange things," a source told The Sun. "It would have been extremely embarrassing for them to bring Harry along and sit him right next to his ex. His advisers would have been furious if they’d put him in that position."

Camilla was apparently booted to another seat and Charles was moved to sit next to Harry instead. But, if you're thinking, "Wow, that's very awkward and I bet it was all smooth sailing at the event otherwise," then you would be so very wrong. Camilla wasn't the only royal ex at the event.

Ellie Goulding, who was spotted making out with Harry back in 2016 (although there's no evidence they were ever really a couple, per se), cut out of the event early, skipping the afterparty to avoid having to make small talk with Harry, according to the Daily Mail.

"Ellie didn't stick around either, tellingly — she made a very quick exit before there was any chance of bumping into him," The Sun's source explained.

Royals, avoiding awkward encounters like the rest of us. 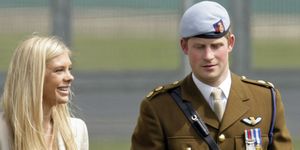 Prince Harry's Ex "Couldn't Cope" With Royal Life
Kayleigh Roberts Contributor Kayleigh Roberts is the weekend editor at Marie Claire, covering celebrity and entertainment news, from actual royals like Kate Middleton and Meghan Markle to Hollywood royalty, like Katie Holmes and Chrissy Teigen.
This content is created and maintained by a third party, and imported onto this page to help users provide their email addresses. You may be able to find more information about this and similar content at piano.io
Advertisement - Continue Reading Below
More From The Ultimate Guide to the Royal Family
Comparing the Two Biggest Royal Weddings
How the Queen Ends Awkwardly-Long Handshakes
Advertisement - Continue Reading Below
The Queen Has a Rule Against Bad Talking Family
The Queen Took a Pic of Philip With Her to Funeral
The Queen's Tolerance Was the Key to Her Marriage
Will & Kate Welcomed Harry Back Into Their Group
Queen Left a Handwritten Note on Philip's Coffin
The Queen Said Grief Is the Price We Pay for Love
All of the Photos from Prince Philip's Funeral
The Queen Wore This Brooch to Philip's Funeral