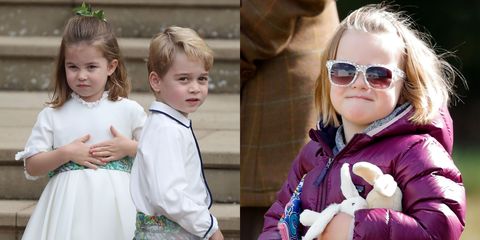 Prince William and Kate Middleton planned an extended family hang out this weekend when they took their oldest children, Prince George, 5, and Princess Charlotte, 3, to the Burnham Market international horse trials in Norfolk. The extended family in question? The Tindalls, Mike and Zara, and their five-year-old daughter, Mia.

For anyone who hasn't memorized the Windsor family tree, Zara is Will's first cousin (she was born Zara Phillips and she's the daughter of Princess Anne and Mark Phillips). The young royal cousins had a blast, as they always do (see: every photo from Princess Eugenie's wedding).

Mia took up some prime real estate on the shoulders of the future King of England and, in one particularly adorable and hilarious photo, even grabbed on to his ears for support, causing Will to wince (the Daily Mail has the photo, along with several more from the royal outing, if you're interested).

Here are just a few other photos of Mia over the years that illustrate what a fun kid/perfect playmate for George and Charlotte she is:

And don't worry: George and Charlotte also got in on the piggyback ride action. George rode around on Mike Tindall's shoulders while Charlotte tapped her mom, Kate Middleton, for the honor.

Prince George Won't Be Allowed a BFF
How Princess Charlotte Greets Guests at the Palace
Kayleigh Roberts Contributor Kayleigh Roberts is the weekend editor at Marie Claire, covering celebrity and entertainment news, from actual royals like Kate Middleton and Meghan Markle to Hollywood royalty, like Katie Holmes and Chrissy Teigen.
This content is created and maintained by a third party, and imported onto this page to help users provide their email addresses. You may be able to find more information about this and similar content at piano.io
Advertisement - Continue Reading Below
More From The Ultimate Guide to the Royal Family
Charles is Looking Forward to Seeing Harry Again
Will & Harry to Walk Together at Philip's Funeral
Advertisement - Continue Reading Below
Prince Charles Addresses Prince Philip's Death
Prince William Pulls Out of 2021 BAFTA Appearances
Prince Philip Said He Had No Desire to Live to 100
The Queen Was by Prince Philip's Side When He Died
Prince Harry Is "Really Upset" Over Philip's Death
Will Harry & Meg Attend Prince Philip's Funeral?
The Queen Is Hopeful Prince Harry Will Return Home
Harry & Meghan React to Prince Philip's Death