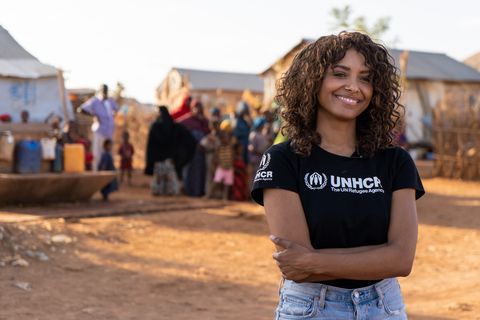 Like many of you, Kat Graham is frustrated. She knows the numbers surrounding the refugee crisis—that the number of individuals fleeing their homes across the globe has skyrocketed to a staggering 71 million (the highest number of displaced people ever recorded), as result of national and civil wars, natural disasters, and more. And she knows the way these innocent people are being treated—like they're not human beings. In America, the Trump administration has infamously separated families at the border, held children in cages, and refused even to grant temporary visas to Bahamians trying to escape the wrath of Hurricane Dorian.

Witnessing those in power make choices that further discriminate and marginalize populations who have already suffered through so much is painful. Without the authority to prevent the circumstances that lead to displacement or create legislation that protects displaced groups, it's only natural to wonder what you, the average person, can do. Allow Graham to inspire you. The singer and actress has turned her frustration into action, partnering with the UNHCR to support refugee communities around the world.

Graham's passion for human rights is perhaps rivaled only by her passion for animal rights (she's a longtime vegan), but her fervor for both stems from a deep desire to speak for those who can't. "I'm a storyteller because I didn't feel like I had much of a voice growing up," she says. "Animals don't have a voice, and refugees don't have a voice, so my whole journey in life has been to tell the stories of those that don't have a platform like I, fortunately, do."

That platform began to take shape at the start of Graham's career. Her debut in the entertainment world included numerous commercial appearances (never forget the original the Fanta Fantanas), gigs dancing backup for megastars like Missy Elliott and Jamie Foxx, and roles as the leading lady in John Legend, Akon, and B2K's music videos. In 2009, Graham got her biggest break yet, the role of teenage witch Bonnie Bennett in The Vampire Diaries. After the series ended, the actress continued to take Hollywood by storm, starring in How It Ends (alongside acting legend Forest Whitaker) and The Holiday Calendar.

But achievement for Graham means so much more than success in Hollywood. "When I was about 14, I remember seeing a photo of Brad Pitt and Angelina Jolie. I ripped it out of the magazine and hung it on my vision board," she recalls fondly. But it wasn't a picture of them on the red carpet. It was of their work with displaced populations. "It was my dream to work with refugees." Now, Graham works in close conjunction with the United Nations High Commissioner for Refugees (UNHCR) and has been for several years.

Her own mixed heritage has been a significant motivator for her global philanthropy efforts: Her father hails from Liberia, her mother has roots in Eastern Europe and Israel, and she was born in Switzerland. As she's grown in her understanding of her unique standing as citizen of the world, Graham's perspective towards the plight of refugees has developed from sympathetic to empathetic, as identifies personally with the struggle of displacement. "People always ask how I found what I'm passionate about," the 30-year-old says, "I say, 'Well, first you look at who you are.'"

"I don't see myself separate from a refugee," she continues. "I'm an immigrant, not born in this country. My family is so close to having dealt with political strife and slavery on both sides that I feel like I have this deep need to support these communities and have always felt that, even as a little girl."

In 2015, Graham's dream came true with the help of her parents, who arranged for her to meet with the United Nations. A short time later, the actress was on her way to a camp in Jordan. That first solo mission fanned the flame of a childhood curiosity into a full-blown raging fire, and led to a number of international trips to visit displaced groups, including her most recent trip to Ethiopia.

Graham's second time in the East African country (she visited with Black Eyed Peas in 2007) was starkly different from her first visit: "Over ten years later, when I returned [to Ethiopia], we took a tiny, tiny plane [paid for by] the World Food Program to the southernmost part of Ethiopia, where there was nothing." Upon arriving in the small, isolated camp in Melkadida, she was was disquieted by what she saw: Small grass and mud huts, sometimes housing entire families, without working restrooms or even electricity in 100-degree heat.

Despite these grim conditions (as well as the desperate circumstances that drove people to the refugee camp in the first place), Graham needs the world to understand one thing: The people living in the Melkadida refugee camp are not just victims. It's essential that we start to see refugees as more than their sufferings. "These incredible men and women and children that I've met are wildly capable—they just want to be able to have the tools to get their lives back," says Graham.

While in Melkadida, Graham was incredibly moved by the unbreakable spirit of the people. In a place that could easily be described as bleak and somber, Graham was greeted by smiles and positivity, the residents each holding tightly to their hopes for the future, as well as their dignity. Entrepreneurs opening up their own businesses, brilliant teenage girls attending school, children laughing as they played—Graham wants to tell these stories as well.

"Once we start seeing ourselves in each other, we'll start to feel the constant need to bring awareness to each other's struggles," she says. This is the main reason that she is so intentional about prioritizing refugee relief efforts amidst all of the work projects that's she's juggling. "It's so important to have an awareness of the world because these issues aren't going away."

Though many of us won't ever be able to take the time to visit a refugee camp, we can still make a meaningful impact on these communities. Getting educated about international displacement is a great start. The UNHCR's website is a great resource. You can also donate to the UNHCR directly via their site. Every dollar goes to ensuring that refugees have access to life essentials, including shelter, water, and food.

"These people need more awareness, and they need more support," says Graham. "We need to find a way to build a better world together."

Clarification: A previous version of this story inaccurately stated that the plane Graham took was chartered by WFP. It was a standard, daily flight. Additionally, it stated that the housing in Melkadida was hastily built and did not have adequate amounts of water. That is incorrect.