Jourdan Dunn has accused Reign nightclub of racism following an event on Saturday evening. The club was hosting a party in honor of Dunn's collaboration with Missguided. However, when the model's brother was refused entry, she accused the nightclub of having a racist agenda.

In a series of tweets, she told her followers to avoid the new London hotspot as they don't "like black people" even though they like playing their music. Stormzy, who was also at the event, then retweeted one of her messages.

THEY WAY I WAS TREATING AT MY OWN EVENT WAS DISGUSTING!

THEY WANT TO PLAY OUR MUSIC BUT DONT WANT OUR BLACK ASS IN THE CLUB, HA IIGHT COOL!

WATCH HOW THE DAILY FAIL FLIP IT IN THE AM THO🙄

The nightclub has since come forward and denied that they have done anything wrong, arguing that it was due to health and safety reasons that they couldn't let anyone else in.

"We are aware that she wanted to exceed her guest list allocation by over 30 people, a request we were unfortunately unable to accommodate due to health and safety," a Reign representative told The Sun. "It was our opening weekend and we were completely sold out. We hope that Jourdan understands that the health and enjoyment of our customers including herself is of upmost importance to us."

Dunn has not said anything else about the altercation and has not deleted her tweets, suggesting that she does not accept Reign's reasoning behind what happened. 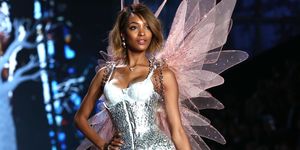 Jourdan Dunn Tweets That the VSFS Is "BS"