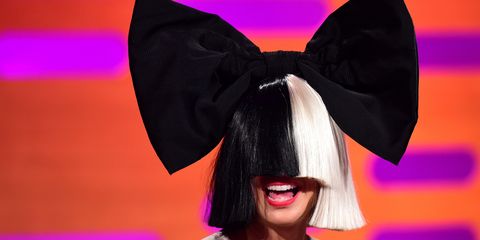 If you're going to take singing advice from someone, Adele is the one you should listen to.

Even Sia, who is a powerhouse singer/songwriter in her own right and helped write Adele's album 25, looks to the British songstress for help. During an appearance on The Graham Norton Show this week, the "Chandelier" singer discussed the difficulty of performing the vocally demanding songs (for which she and Adele both are known), night after night while on tour.

"Adele gave me a top tip. She was like, 'Yeah, whenever you can't hit the high note, you're just like la la la,'" Sia said, then miming as if she were directing a microphone out to the audience.

Chances are good that everyone in the audience is already singing along anyway, so hey, why not let them handle the high notes? Honestly, it is a pretty brilliant idea.

"I was like, there's a reason she has 80 million dollars!" Sia adds.

Adele kicks off her tour in February 2016, so we'll be watching to see if she employs this sneaky strategy.

See more from Sia's visit to The Graham Norton Show in the video below: