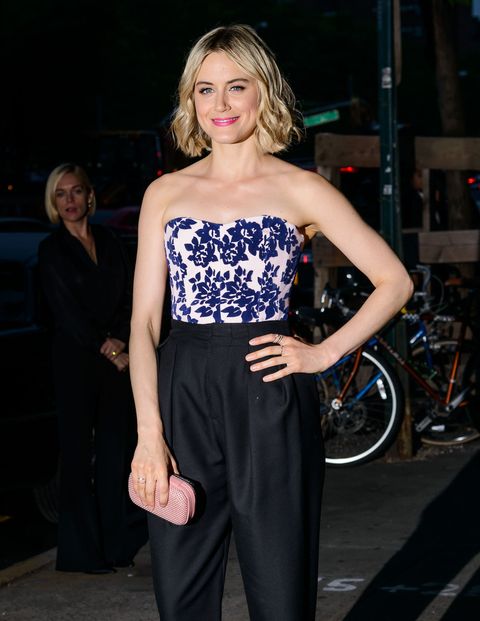 If we have learned anything from celebrities, it is that sex scenes are very individual experiences. Brooklyn Decker's was super awkward, but the Evian-spray sweat made it chic at the same time. Emilia Clarke's involved a fluffy pink sock concealing Aquaman's, um, trident. And Mindy Kaling likes filming hers because it can be just as fun to make believe.

Taylor Schilling's Orange Is the New Black story, though, takes top prize, given the blood loss and subsequent medical attention.

"I hurt myself," Schilling said during a recent appearance on Seth Meyers. "I got very excited, I took my shirt off, and I scratched myself with my little name tag. There was a gash on my face—there was blood," she continued, adding that the show needed to take an hour break while she had the cut checked out.

Tough job (faux) getting it on with Laura Prepon, but someone's got to do it. Watch the interview below.

This content is imported from YouTube. You may be able to find the same content in another format, or you may be able to find more information, at their web site.
Chelsea Peng I'm Chelsea Peng, the assistant editor at MarieClaire.com.
This content is created and maintained by a third party, and imported onto this page to help users provide their email addresses. You may be able to find more information about this and similar content at piano.io
Advertisement - Continue Reading Below
More From Celebrity
Iconic Party Photos From the Past
The Best TV and Movie Wedding Dresses of All Time
Advertisement - Continue Reading Below
40 Celebrity Sisters Who Look So Much Alike
40 Rare Photos of Grace Kelly Through the Years
A Look at Royal Family Portraits Through the Years
The 50 Most Popular Episodes of ‘Friends,’ Ranked