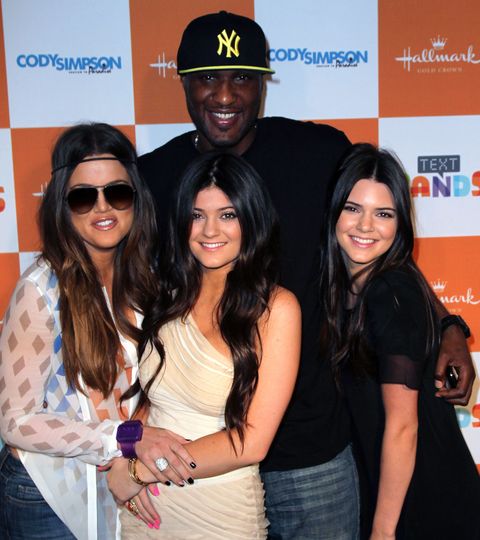 Amidst reports of her former brother-in-law's improving condition, Kylie Jenner posted an Instagram with a heartfelt message.

Update, 10/14: As Lamar fights for his life, Kendall Jenner took to Twitter to send a message to her former brother-in-law:

Original story, 10/14: Khloé Kardashian's love for ex-husband Lamar Odom, after his spiral into addiction and their subsequent divorce, has really never wavered. And now that he's in a coma, she's flying to Vegas to be by his side.

Following a night at the Bunny Ranch brothel, where he was reportedly taking "herbal Viagra," the basketball player was found unconscious yesterday and rushed to a local hospital. Odom's condition is said to be "very serious", and, according to TMZ, he's in a coma, breathing with the assistance of machines, and fighting potential heart failure.

It's a shocking development for fans, but, sadly, maybe less so for Kardashian herself. On a recent episode of Keeping Up with the Kardashians, after hearing that a friend of Odom's was dying, she said: "I'm really on high alert for Lamar because I mean, anything I think will set him to spiral, and that's kind of the last thing I want for him."

"This is all just really upsetting," she added. "He's distraught and devastated. Lamar has suffered so much loss in his life. I'm always going to be there for Lamar, especially when something as tragic as this happens."

Samantha Leal Senior Web Editor I'm Sam, the senior editor at MarieClaire.com.
This content is created and maintained by a third party, and imported onto this page to help users provide their email addresses. You may be able to find more information about this and similar content at piano.io
Advertisement - Continue Reading Below
More From Celebrity
Um, Why Is the Weeknd's Face Bloody and Bandaged?
Your First Look at Kristen Stewart as Diana
Advertisement - Continue Reading Below
47 'Friends' Facts Every Superfan Should Know
Eugenie Shared a Rare Candid Snap With Her Husband
Why Serena Didn't Want Olympia to Play Tennis
J.Lo Talked Botox Claims: "Don't Call Me a Liar"
Kate Has Her Own Direct Line to the Queen
Megan Thee Stallion’s Hottie Bootcamp Is Intense
Katie Holmes' Mango Puffer Coat is a Winter Staple
Kate Rewore Her Favorite Festive Tartan Dress