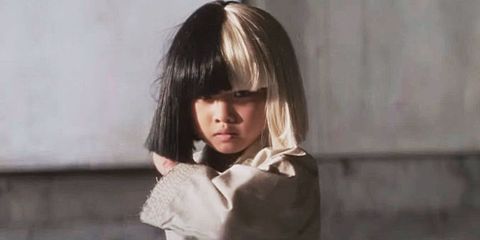 Update, 11/5: The music video is aliiiiiive! Directed by Sia herself alongside Daniel Askill, it stars a young Japanese girl named Mahiro Takano who is a wig-clad master of martial arts. Get ready to have your mind blown below:

Original, 11/3: Sia and her signature platinum wig just released a new song, and it was this close to being on Adele's forthcoming album. The artists worked together for Adele's 25, and while their collaborations didn't make the cut, two songs became singles for Sia.

The songwriter's new album, This Is Acting, drops January 29, and like the first single, "Alive," her new song, "Bird Set Free" was written by Adele, Sia, and Tobias Jesso Jr.

"I actually love the dynamic of us both being in there and just f—king being bossy," Adele told Rolling Stone of working with Sia. "And it's all these male producers, and they're all f—king sh—tting themselves 'cause we're in there."

After listening to the song, it's hard to understand why Adele passed on something so beautiful (especially with personal lyrics like "had a voice but I could not sing"), but Sia absolutely kills it. Listen to "Bird Set Free" below.

Mehera Bonner Contributor Mehera Bonner is a news writer who focuses on celebrities and royals.
This content is created and maintained by a third party, and imported onto this page to help users provide their email addresses. You may be able to find more information about this and similar content at piano.io
Advertisement - Continue Reading Below
More From Celebrity
Meghan and Harry Share New Archie Photo
The Cambridges Share Their First Full YouTube Vid
Advertisement - Continue Reading Below
Courteney Cox Said the 'Friends' Fountain Was Grim
Meghan Wins Copyright Claim Over Letter to Father
The Royals Wish Archie a Happy Second Birthday
Charles Is Reportedly “Aggrieved” With Harry
Adele Stuns in Rare Birthday Photo Dump
Serena and Olympia Twinned in Swimsuits Again
Joe Jonas Opens Up About Parenting Daughter Willa
Kourtney & Travis Have Talked About Marriage