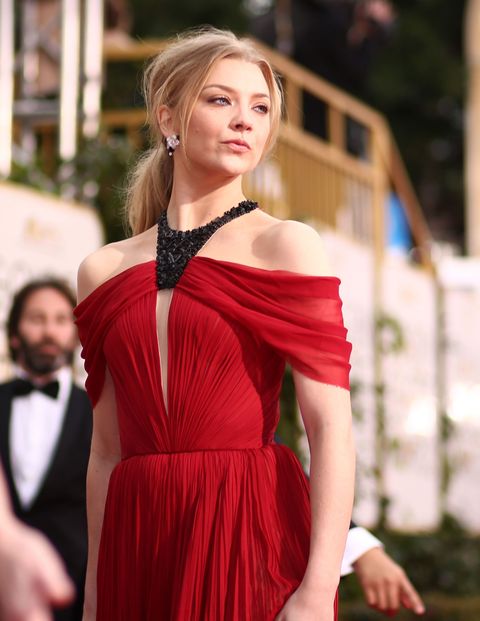 The last time Natalie Dormer/Margaery Tyrell gave an interview, she spoiled Game of Thrones season six like it was NBD. Since then, she's probably been warned to keep her mouth shut good, but in this new profile in the Evening Standard, she still manages to sneak in an *intriguing* bit about nudity on the show.

"You learn to navigate it," she said of her earlier roles, like playing Anne Boleyn on The Tudors, which livened up history with more hot sex than was probably accurate. "I've never come across a director, or a co-star, who's disrespectful or insensitive about it. You can only take it on a case-by-case basis…There's plenty of male nudity in Game of Thrones, too. Sex is part of life, ergo it's part of art. If you're representing real life, then you will represent sex."

True, true. In the same vein, she also talked about how The Hunger Games brought equality of a different sort to the big screen.

"The money men now know that it's not going to damage their revenue to have a fully fleshed-out, three-dimensional female in the lead. Like, hello, guys? It doesn't hurt to write for 50 percent of the population. But, you know, it's not just the film industry. It's a society problem—we just have the platform to talk about it in our industry."

Chelsea Peng I'm Chelsea Peng, the assistant editor at MarieClaire.com.
This content is created and maintained by a third party, and imported onto this page to help users provide their email addresses. You may be able to find more information about this and similar content at piano.io
Advertisement - Continue Reading Below
More From Celebrity
Celebs That You Forgot Were on MTV Shows
The Best TV and Movie Wedding Dresses of All Time
Advertisement - Continue Reading Below
47 'Friends' Facts Every Superfan Should Know
40 Celeb Exes Who Worked Together After a Breakup
35 Unforgettable Royal Wedding Scandals
The 50 Most Popular Episodes of ‘Friends,’ Ranked
Iconic Party Photos From the Past