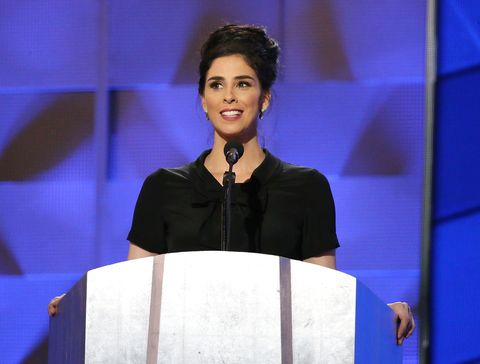 The tweet in question, which has since been deleted, links to a video from "Anonymous," the international group of hackers that "declared war" on Donald Trump earlier this year. The tweet said, "America, are you awakening?" with a link to the video, which attacks Clinton, as well as a #Hilary4Prison hashtag. Here's a screen grab of the tweet:

Never has there been a more opportune time for Silverman to use Taylor Swift's infamous line: "I would very much like to be excluded from this narrative, one that I have never asked to be a part of."

Maggie Maloney Associate Digital Editor Maggie Maloney is the associate editor at Town & Country and ELLE Decor, where she covers style, beauty, jewelry, and the many members of the royal family.
This content is created and maintained by a third party, and imported onto this page to help users provide their email addresses. You may be able to find more information about this and similar content at piano.io
Advertisement - Continue Reading Below
More From Celebrity
Brad Isn't "Angry" About His GF's Angie Comment
J.Lo’s Abs Look So Toned In Maluma Video
Advertisement - Continue Reading Below
Meghan Could "Seriously Consider" Running for Prez
The Most Expensive Celebrity Weddings of All Time
Chrissy Shared an Ultrasound Picture of Her Baby
Meghan and Harry Are Now Paying Rent on Frogmore
Princess Eugenie Is Pregnant With Her First Child
Demi Lovato and Max Ehrich Have Broken Up
Drag Queens Trixie Mattel & Katya on Their Jewelry
Selena Gomez Shows Off Scar in Blue One-Piece