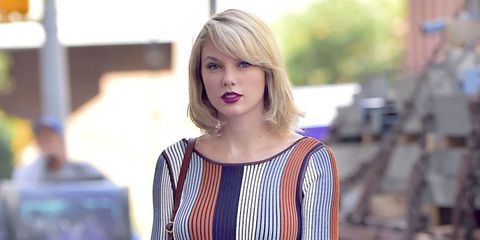 A new deposition from Taylor Swift's case against David Mueller has just been released, and in it she gives even more (highly upsetting) details about the DJ allegedly groping her while they posed for a photo in 2013.

"A strange man's hand just lifted up my skirt," Swift says. "It's impossible for me to definitively answer whether the moment captured on the photo is the moment directly before he grabbed my ass, right when he grabbed onto my ass cheek, or the moment when I was obviously squirming to the side because I was uncomfortable."

Swift says she didn't confront Mueller because she was in a room with fans, but explains she was visibly distressed, saying "I was looking at the floor, and I just wanted him to be gone." The DJ was fired two days after the incident, and sued Swift for slander in 2015. His take is as follows:

"I would say it's possible that my hand came into contact with her skirt or somewhere behind her. But as I stated earlier, she was moving my hand; I was moving her hand. I did not think I touched her inappropriately, which is why I did not apologize to her. I would have apologized had I thought I did something inappropriate."

Swift plans to donate any winnings from her countersuit to charities that protect women from sexual assault.