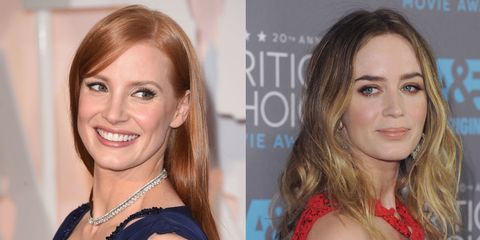 The upcoming Snow White and the Huntsman prequel is shaping up to have a mega-talented cast. Chris Hemsworth and Charlize Theron are returning as the huntsman and the evil queen, and they're bringing more A-listers along with them.

The fantasy movie is a prequel of the 2012 film, and follows Hemsworth's and Theron's characters before they met Snow White, who was played by Kristen Stewart. It's scheduled to hit theaters on April 22, 2016, so you're going to have to wait a little while—damn.

Jessica Chastain will reportedly play Hemsworth's love interest in the new movie. Emily Blunt will also appear in a wicked role, fresh from another fairy-tale part in Into the Woods. According to The Wrap, she'll be playing the evil Snow Queen, sister to Charlize Theron's scheming Ravenna. Nick Frost, who appeared as a dwarf (with the help of CGI) in the first film, will also bring back his character.

The production of The Huntsman has been dramatic from the start. After the first film was released, Stewart and married director Rupert Sanders were embroiled in a scandal after pictures of the two of them kissing hit the tabloids. Stewart won't be starring in the new movie, and Sanders, who is now divorced, won't be directing.  Then, reports surfaced that Theron had to negotiate for an equal salary to Hemsworth after the Sony hack revealed a gender pay gap in Hollywood.

Just this week, director Frank Darabont dropped out of the project. Cedric Nicolas-Troyan, who did the visual effects for Snow White, will direct instead. But given the amazing cast, this has a good chance of being just as compelling as the original, drama or no drama.

Advertisement - Continue Reading Below
More From Culture
87 Movies Everybody Should Watch At Least Once
The Best Documentaries on Amazon Prime Right Now
Advertisement - Continue Reading Below
Heart-Pumping Action Movies Coming Out This Year
The Best TV Shows on Hulu Right Now
The Documentaries You Can't Afford to Miss in 2020
'Killing Eve' Season 3 Review: What's Old Is New
A Super Pink Moon is Coming April 7
Pre-Order These Amazing Books Coming Out in 2020
The 8 Best Rom-Coms of 2020
Got 10 Minutes? Here's What to Watch on Quibi