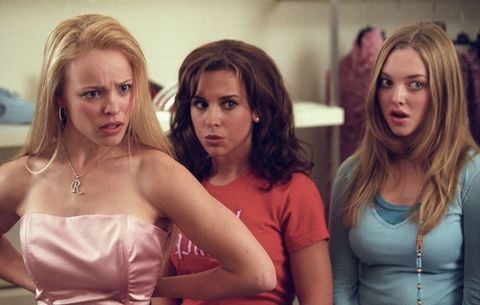 In girl world (or honestly, in any world), Mean Girls is still one of the best films ever made. Which is why, up until today, you couldn't do much to make Mean Girls better. Between Burn Books, teen house parties, and a much-copied "Jingle Bell Rock" dance, the writers and producers pretty much nailed it.

Until they decided to cut a genius scene, that is.

It's fair to say that Damian is portrayed as Janis Ian's sidekick in the film. Sure, he wants revenge on the Plastics too…but it's not so personal for him. So for the most part, we see Janis doing the "bring down the Plastics" planning in the finished movie.

But in this new scene, the tables are turned (literally) when Damian sneaks into the school cafeteria to stealthily unscrew a table, with the intention of publicly embarrassing Regina George. Watch below:

Cady is involved too, of course—she can be seen laying out a tray of spillable food ready to land on her nemesis. But when Regina gets (unknowingly) saved by Aaron Samuels, Karen takes her seat instead and ends up covered in a big mess.

Considering each of the girls' parts fit perfectly with this clip—Cady the discreet saboteur, Karen the dopey friend, and Regina the fake "bestie"—it seems unfortunate that it was cut.

Raise your hand if you're still kinda wishing Damian stole Prom Queen from everyone.