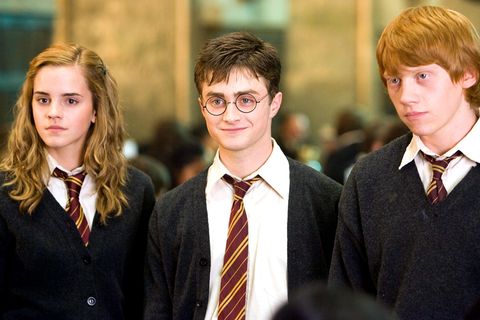 Everything you love is suddenly headed to the stage—Clueless. Downton Abbey. Pretty Woman. The Devil Wears Prada. Guess little ol' Harry Potter was feeling left out, because now the Hogwarts crew is hitting the theater too.

After years of teasing Potterheads with short stories and essays on Pottermore, J.K. Rowling tweeted Friday that a new play called Harry Potter and the Cursed Child will premiere in London in 2016, and will be a collaboration between writer Jack Thorne, director John Tiffany, and J.K. herself.

She gave no details about the plot, of course, but said that it would not be a prequel. As for why it's a play instead of a novel, only J.K. knows, but she claims it will all become clear once you see it in person. Start saving for tickets to London and/or a new Firebolt now!

Today is a very special day for two reasons. Firstly, Harry Potter and the Philosopher's Stone was published in the UK 18 years ago!

I'm also very excited to confirm today that a new play called Harry Potter and the #CursedChild will be opening in London next year.

It will tell a new story, which is the result of a collaboration between writer Jack Thorne, director John Tiffany and myself. #CursedChild

However, I can say that it is not a prequel! #CursedChild

To answer one inevitable (and reasonable!) question - why isn't #CursedChild a new novel? - I am confident that when audiences see the play

they will agree that it was the only proper medium for the story. #CursedChild

I've had countless offers to extend Harry's story over the years, but Jack, John and Sonia Friedman are a dream team! #CursedChild

It has been a huge pleasure to share with them (and soon, with you!) this untold part of Harry's story. #CursedChild

Eliza Thompson senior entertainment editor I’m the senior entertainment editor at Cosmopolitan.com, which means my DVR is always 98 percent full.
Advertisement - Continue Reading Below
More From Culture
The Best New Music of 2020 (So Far)
Listen Up: Gripping New True Crime Podcasts
Advertisement - Continue Reading Below
'The Bachelor' Has Already Finished His Season
Unmissable Horror Movies Coming Out This Year
Who Is 'Bachelor' Peter's Mom Talking About?
Sarah Coffin Might Be a 'Bachelor' Frontrunner
Who Is 'Bachelor' Contestant Victoria Fuller?
Meet the Star of 'The Bachelor's ChampagneGate
Jurnee Smollett-Bell Is a Real Life Superhero
The Best Love Songs to Ever Exist