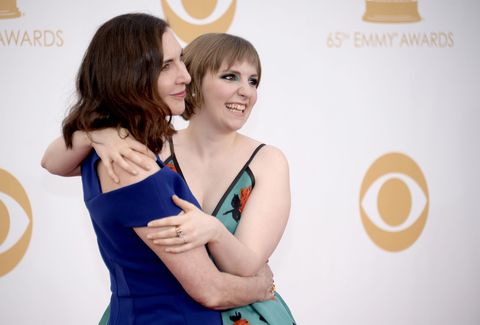 This is a special preview from Lenny: Feminism, style, health, politics, friendship and everything else from Lena Dunham and Jenni Konner. Like it? Share it with a friend.

For some teenagers, WB shows were aspirational, but I just wanted to mimic the 1970s SoHo life of my mother, one Laurie Simmons: Eternally broke, with your feet dangling off fire escapes, an angora sweater exposing one pale shoulder. Meeting your soul mate at 27 and writing in your diary that he looks like a mouse. Making art until four in the morning and drinking coffee in a button-down shirt and knee socks while your male roommate photographs you casually. My mother sometimes jokes that she had a second child purely so I would stop asking her so many questions. It didn't work.

It took me a long time to realize that not everyone wants to become their mother, and still longer to develop a plan of my own. But even now, as a woman nearing 30, photos of my mother's young life are infinitely more transfixing and emotional than my own. I want to wear her clothes, drink a thimble of rosé and give advice so good that my loony friends call in the middle of the night asking for more. I want to be as creatively engaged and pissed at the world when I'm 65 as I am right now. And I want my life to look like a viable option to my daughter, even if she chooses an entirely different one.

My mother explained abortion rights to me very early in my life. She had to, as she often went on overnight trips with the Women's Action Coalition to promote reproductive justice, carrying signs that said things like "A WOMB OF MY OWN" and linking arms with her fellow women around a clinic that was under attack by enraged religious groups. Abortion may have been legal already but it still was not stigma-free. The women entering these clinics needed support and protection as much as they ever had. I understood, then, that abortion was a right and that it hadn't always been, and that we had to do all we could to make sure it stayed legal.

I knew that she and her comrades could remember a time when abortions were illegal but happened anyway, and when she said "back alley" I pictured the dark streets of Oliver Twist. She taught me to say "anti-choice" instead of "pro-life"—"we are all pro-life, sweetie." And at some point she told me her own story, about being young and in love with a kind boy but not ready to become a parent, and needing help she couldn't find. Always possessed of a dramatic streak, I said, "Wait, so I almost had a brother?" No, that wasn't the moral of the story.

I always knew that, were I to become pregnant, I would find a safe harbor in my mother. There were plenty of ways I could disappoint her— lying, cheating, wearing chinos— but this wasn't one of them. "Never be scared to tell me anything," she said. And I wasn't. That's a large part of the reason I can write and talk about sex without shame. That's a large part of the reason I was able to ask the questions necessary to protect myself in my early twenties. I know who my body belongs to. She left me with no questions about that.

Unlike me, my mother is a decidedly private person, so when I asked her to share her experience with abortion pre Roe vs. Wade it took a little coaxing. I already knew the story. It was an essential part of my DNA. But when she finally sent her Word document I was struck by its simple, offbeat beauty; its strange and oddly poetic details; its honesty and power and bravery. That's my mom. That's your mom too I bet, if you ask her.

I was considered an "arty" girl, a tough girl, a teenage rebel and a brave girl. In hindsight it appears I was also a responsible girl, surprisingly so for the time and my age (17).

I'd thought long and hard about "going all the way" and waited until I graduated from high school to even consider it. I wanted to be as far from home as possible when this event occurred. I met the right person my first year of art school. I'd fallen in love with a really cute boy who seemed very exotic. He was a drummer in a local band and the same age as me. He came from my hometown but we'd somehow never met. It turned out that my father had dated his mother when he returned from the war overseas and my mother had gone to elementary school with his father.

I'd also gone to a clinic in New York City to get birth control from a lovely Irish midwife. I was prepared. I don't remember how it happened—but things can and do go wrong. My period was late.

I went to a doctor just outside the edge of campus to get a pregnancy test. I sat in the waiting room until his receptionist delivered the news that the test was positive. She gave me the results in a loud voice, ignoring the fact that another girl was sitting in the office. She was an older art student, remote and beautiful. I'd noticed her before but she'd never spoken to me until now.

"I have a name and number," she said. "Call this man and he will arrange for you to fly to Puerto Rico." I took the number and didn't ask any questions. I couldn't believe my good fortune, because frankly I didn't know what I was going to do. There wasn't even a remote chance I would or could tell my parents. Even if I'd told just my mother I knew she wouldn't know what to do. I suspected she didn't have a lot of ingenuity when it came to these sorts of illegal things.

It was all very straightforward. I was to pay a fee to this man and we would buy our tickets to Puerto Rico. My boyfriend and I would get picked up at the San Juan airport and driven to the "doctor" there (was he really a doctor?) and then driven back after the abortion was performed. I'd only been on a plane twice, so that would be fun. The only hitch in our perfect plan was that we didn't have enough money to buy two tickets. I had to go alone. Honestly, I wasn't afraid. This had to be done. It was an accident. I was 17. I'd wanted to be an artist my whole life. I knew I'd probably want children some day but a sensible, rational part of me knew I was still kind of a child myself.

The date was set for 10 days later. A few days before my scheduled departure I got my period. I was really relieved but kind of upset we'd lost all that money. I chalked it up to good luck and never thought about it as more than a story until I had daughters of my own.

Thinking about the experience now, from a mother's point of view is nothing short of paralyzing. Imagining a young woman flying to a strange place to see a strange doctor who might not really be a doctor, going to a strange address not one person at home knew and with no one to hold her hand is unthinkable. That is without even imagining complications, missed flights and attempted communication pre cell phone. And finally imagining a young woman brave enough and naïve enough not to be frightened, to put herself in potentially grave danger for a decision she believed was her right to make is the most heartbreaking thought of all.

Could this story even be real? Yes it is. Could we ever let this kind of thing happen again? No, never.

Lenny is an email newsletter founded by Lena Dunham and Jenni Konner, the creators of HBO's Girls. Subscribe now at Lennyletter.com.