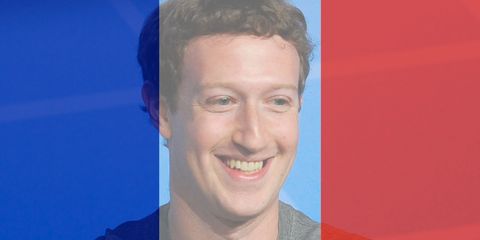 Safety Check isn't a new feature for Facebook. In fact, Mark Zuckerberg introduced it to the social platform over a year ago. However, it wasn't until the Paris attacks on Friday night that many started noticing an unfamiliar notification confirming the safety status of their friends located in the area: "[Friend's Name] was marked safe during Paris Terror Attacks."

The tool allows users to check in on friends during a disaster or crisis. Facebook describes it as "a simple and easy way to say you're safe and check on others." Which was a welcome relief for those with friends and loved ones in or around Paris during the tragic attacks that took at least 129 lives and left 352 injured. According to The Huffington Post, as of last night 4.1 million people had checked in as safe using the feature in the 24 hours since it launched.

Despite the positive impact of Safety Check in Paris, Facebook is receiving backlash in the aftermath for failing to introduce this feature for the Beirut suicide bombings that killed 43 people and wounded 239 more on Thursday.

In a Facebook post yesterday, Vice President of Growth Alex Schultz addressed the issue of why Safety Check was turned on in Paris and not in Beirut, "where violence is more common and terrible things happen with distressing frequency." He explains that Friday was the first time the feature had been implemented for something other than a natural disaster—the criteria for other life-threatening situations, such as wartime violence or epidemics, are not as easily defined.

In the case of natural disasters, we apply a set of criteria that includes the scope, scale and impact. During an ongoing crisis, like war or epidemic, Safety Check in its current form is not that useful for people: because there isn't a clear start or end point and, unfortunately, it's impossible to know when someone is truly "safe." Each time we have launched the tool, we've improved it.We chose to activate Safety Check in Paris because we observed a lot of activity on Facebook as the events were unfolding… We talked with our employees on the ground, who felt that there was still a need that we could fill. So we made the decision to try something we've never done before: activating Safety Check for something other than a natural disaster. There has to be a first time for trying something new, even in complex and sensitive times, and for us that was Paris."

Perhaps not the most satisfying explanation for critics of Facebook's decision. Even still, Schultz closes with a reminder that Safety Check is a work in progress, reassuring users that Facebook continues to work to make it a useful and effective tool for other serious incidents in the future.

Sarah Lindig Senior Digital Editor, Special Projects Sarah Lindig is the senior digital editor, overseeing special projects for Harper's Bazaar.
This content is created and maintained by a third party, and imported onto this page to help users provide their email addresses. You may be able to find more information about this and similar content at piano.io
Advertisement - Continue Reading Below
More From Culture
Watch These Ghost Movies at Your Own Risk
'Haunting of Hill House' Will Return Soon
Advertisement - Continue Reading Below
Where You've Seen the Cast of 'Away' Before
Fans Are Clamoring for a Second Season of 'Away'
It's Been a Weird Year for 'The Bachelorette'
Fans Are Speculating About This 'Bach' Contestant
16 Books by Latinx Authors We Can't Put Down
The Best Korean Dramas to Get You Hooked
30 of the Best Sex Podcasts
Here's How to Help Victims of the Deadly Wildfires