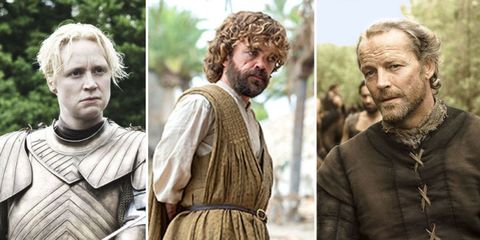 As the old gag goes, Game of Thrones is like a Tweet: It's got 140 characters and usually ends with something horrible.

So far the show's makers have done an amazing job of casting all those characters—easily 140 of them—and in nearly every case, the actor embodies the role exactly as described by George R. R. Martin in his books.

Now and again, though, they deviate slightly. Mostly because special effects just don't allow for it (like Tyrion's missing nose), but sometimes because Martin just wrote them silly. Don't believe us? Check out what five of your favorite characters would look like if the show followed the books to the letter.

While the show's Tyrion gained an impressive scar at the battle of the Blackwater, in the books, he lost his nose. He's described as having green and black eyes, as well as blond and black hair, which is confusing to say the least.

Iwan Rheon has the crazy eyes thing down pat, but it's fair to say his is a flattering portrait of the psychopathic "mad dog" of the Dreadfort. Martin says Ramsay is big-boned, slope-shouldered, fleshy, pink and blotchy with a broad nose, and small, close-set eyes ("pale, like chips of dirty ice"), long dry hair, and "wormy" lips.

Sorry Gwendoline Christie, you're just too good looking. The 6' 3'' actress may have Brienne's height, but her noble, if unimaginative, warrior is meant to be manly and flat-chested, with two teeth knocked out, a wide, swollen mouth and a broken nose. But she does have notably pretty eyes, at least as perceived by Jaime Lannister, so we've made a bit more of them in our rendition.

Yes, blue. Michiel Huisman's sellsword has charm to spare, but would Daenerys, Breaker of Chains, Mother of Dragons and, presumably, a woman with her pick of the boys (and girls), choose him as her bedmate if he looked like he does in the books? Not counting in his favor: a three-pointed blue beard, gold moustache, gold tooth, and "large, curving nose".

Iain Glen is certainly a big man, and hairy, just as Martin describes. He's even balding. But the books' Ser Jorah is a dark, bear-like man with a demon-face tattoo on his cheek to signify that he's an escaped slave.

This content is created and maintained by a third party, and imported onto this page to help users provide their email addresses. You may be able to find more information about this and similar content at piano.io
Advertisement - Continue Reading Below
More From Culture
The Best Serial Killer Movies Ever Made
What to Know About Tayshia's 'Bachelorette' Cast
Advertisement - Continue Reading Below
Tara Palmeri on Hosting a Podcast for Survivors
It's Been a Weird Year for 'The Bachelorette'
Clare Crawley's 'Bachelorette' Cast Is Out
Honor RBG With These Books & Movies
Sad Movies for When You Need a Good Cry
'The Undoing' Is Packed With Stars
How to Join Marie Claire's Online Book Club
'His Only Wife' Is Our October Book Club Pick