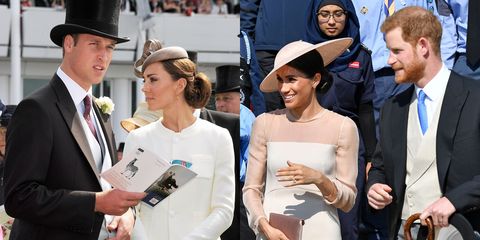 Meghan Markle is officially part of the royal family. For her first post-wedding event, the Duchess of Sussex attended a garden party in honor of Prince Charles's 70th birthday with Prince Harry, Camilla, and the Prince of Wales himself. (Prince Charles' birthday isn't until November, but it's his "milestone birthday," so the royal family will have multiple celebrations leading up to the day.)

Meghan, likely knowing the entire world is watching her every move and analyzing her every outfit, wore a rose-colored dress from Goat, a matching Philip Treacy hat, and beige pumps. She accessorized with Vanessa Tugendhaft rose-shaped earrings and a Wilbur & Gussie pale pink clutch. The feminine look was very on-theme for the garden party and didn't distract anyone from the big event (even with a sheer neckline and sleeves).

Meghan's look was quite different than that of Kate Middleton when she made her first appearance as an official royal back in 2011. Seven years ago, Kate attended the Investec Derby Festival and wore a cream-colored Reiss dress that hit above her knees. A surprising move, considering royals almost always go for longer dress lengths.

Still, the Duchess of Cambridge kept it modest by covering up with a Joseph tweed jacket, while Meghan opted for sheer details on her own dress.

After making headlines, earlier in the year, for not wearing tights, Meghan wore a noticeable, neutral-colored pair for her first royal outing. Kate, however, appears to have ditched that rule. (Though, she could very well have been wearing these barely-there John Lewis stockings.)

The two duchesses have their own signature styles, and we're so thrilled to have them both as inspiration.

Getty Images
This content is created and maintained by a third party, and imported onto this page to help users provide their email addresses. You may be able to find more information about this and similar content at piano.io
Advertisement - Continue Reading Below
More From The Ultimate Guide to the Royal Family
The Queen's Corgis Are Helping Her With Her Grief
Charles is Looking Forward to Seeing Harry Again
Advertisement - Continue Reading Below
Will & Harry to Walk Together at Philip's Funeral
Prince Charles Addresses Prince Philip's Death
Prince William Pulls Out of 2021 BAFTA Appearances
Prince Philip Said He Had No Desire to Live to 100
The Queen Was by Prince Philip's Side When He Died
Prince Harry Is "Really Upset" Over Philip's Death
Will Harry & Meg Attend Prince Philip's Funeral?
The Queen Is Hopeful Prince Harry Will Return Home