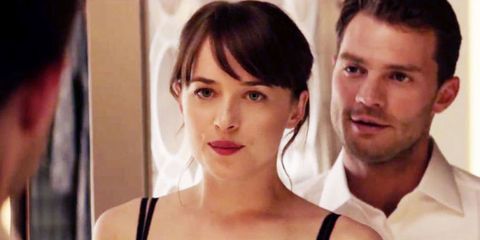 Almost exactly two years after Fifty Shades of Grey hit theaters, its sequel, Fifty Shades Darker, will attempt to recreate the first film's huge success at the box office. The series, based on the blockbuster books by E.L. James, follow the BDSM-centric relationship between Anastasia Steele (Dakota Johnson) and Christian Grey (Jamie Dornan.)

In the book Fifty Shades Darker, Anastasia and Christian (spoiler alert!) continue their romance, but in a softer, more "vanilla" way, at least at first. We learn more about Christian's backstory, including his family and his previous lovers, including a "Mrs. Robinson" type played by Kim Basinger.

The director of Fifty Shades of Grey, Sam Taylor-Johnson, exited the franchise after reported clashes with James over creative vision; James Foley has taken the helm going forward. Fifty Shades Darker was filmed back-to-back with the third movie in the series, Fifty Shades Freed, and a studio executive has said that this movie will be "more of a thriller" than its predecessor.

On Monday, the movie released a teaser trailer as well as the poster, both featuring Anastasia Steele decked out in an ornate masquerade mask, a brief tease for masquerade ball in the movie's plot.

Here's the worldwide debut of the #FiftyShadesDarker poster. See the trailer tomorrow.

Tomorrow, slip into something a shade darker. #FiftyShadesDarker

Fifty Shades Darker will hit theaters on February 10, 2017, just in time for Valentine's Day. (Fifty Shades Freed is scheduled to arrive in February 2018.) Watch the full trailer below: