Ryan Murphy's genius has crafted, cultivated, and produced the most disparate TV series: American Crime Story, Glee, and seven seasons of American Horror Story. Now, we have the eighth season of American Horror Story, debuting on September 12, and the trailer alone will make your bones quake. As will the scene of a black-painted hand caressing a red, glossy, demonic baby in the season's poster.

Warning: The trailer features a horde of scorpions piled into a large fig. The fig is sliced open by a skeletal hand. Ryan Murphy, you've done us dirty with this one.

A black liquid streams through a baby's umbilical cord into a blackened, shriveled beating heart. The heart catches fire. There is a nuclear explosion: more fire. We see a roof take the shape of a Satanic symbol. It, too, catches fire. The camera seems to be moving through these scenes seamlessly, an element of one shot rapidly transforming into the next.

The visuals have a certain immersive effect; it is as if no matter how quickly the camera moves, or how different each scene seems, we cannot escape this twisted, burned-up, post-apocalyptic world. "It's the apocalypse in the truest sense of the word," according to Sarah Paulson.

Ryan Murphy has confirmed that a few of the iconic members of the otherworldly AHS landscape will return again: Jessica Lange, Sarah Paulson, Evan Peters, and Kathy Bates. Breakout actor Cody Fern, from Murphy's other show, American Crime Story: Assassination of Gianni Versace, will join the show as well, as a grown-up version of the Antichrist baby from AHS's first season, "Murder House."

Related Stories
'AHS' Season 8 Will Be Set in the Future 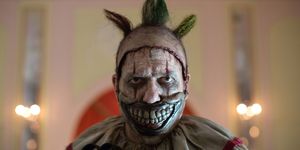 'American Horror Story's' Most Disturbing Moments
Zoe Harris Zoe is a contributing writer at MarieClaire.com; she covers celebrity and news.
Advertisement - Continue Reading Below
More From Culture
The Best New Music of 2020 (So Far)
Listen Up: Gripping New True Crime Podcasts
Advertisement - Continue Reading Below
'The Bachelor' Has Already Finished His Season
Unmissable Horror Movies Coming Out This Year
Who Is 'Bachelor' Peter's Mom Talking About?
Sarah Coffin Might Be a 'Bachelor' Frontrunner
Who Is 'Bachelor' Contestant Victoria Fuller?
Meet the Star of 'The Bachelor's ChampagneGate
Jurnee Smollett-Bell Is a Real Life Superhero
The Best Love Songs to Ever Exist