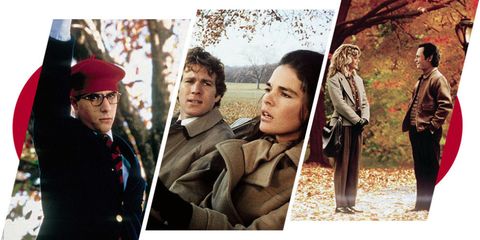 Current aesthetic: That scene from the Lion King but with "A+ sleeping weather" spelled out in the clouds instead of "sex." Yes, even though most of us have spent enough time on this good earth to know that fall happens every year without fail, it is still extremely exciting and invigorating to remember sweaters. Below, 10 of the most autumnal films to be enjoyed under a duvet/before gallivanting in some foliage.

What it's about: Richard Gere dates woman half his age and has commitment issues, but it's supposed to be romantic because Winona Ryder has a malignant tumor.

Why it's fall-y: Pretty self-explanatory.

What it's about: White men who have Sex Problems that are really Woman Problems.

What it's about: It's hard to be cynical about this one because of Robin Williams and Walt Whitman and young Robert Sean Leonard, so we shall say it's about growing up and Neil's father being a complete asshole.

Why it's fall-y: It's set in a prep school where they have ties and secret organizations, so just guess what the only appropriate season for this would be.

What it's about: People being scared of clever, driven girls, even when they're Reese Witherspoon. A tale as old as time.

Why it's fall-y: Those sweater vests, yo. Suburban school politics. Poster board and glitter glue. Stuffing the ballot box. ;)

What it's about: College kids from different sides of the tracks fall in love, and it is weepy even though amour allegedly triumphs over class differences and disapproving parents. It doesn't matter, though, because...well, you'll see.

What it's about: Julia Roberts bringing feminism to Wellesley in the 1950s, LOL.

Why it's fall-y: Wellesley in the '50s = great outerwear, plaid.

What it's about: Jason Schwartzman and Bill Murray like the same woman.

Why it's fall-y: Another one about school, but with berets and blazers and graveyards for Halloween, as done by Wes Anderson. So it's the school-iest, quirkiest of all.

What it's about: Disillusioned youths.

Why it's fall-y: Demi Moore is everything. They just graduated from Georgetown.

What it's about: The story of Amazon, but with Tom Hanks and Meg Ryan. Also interesting from an anthropological standpoint if you can't remember how people dated before Tinder (AIM).

Why it's fall-y: Because it starts as basically a giant ad from the New York tourism board to show that, between Hot Garbage and Gray Slush Seasons, there are like two weeks when the city is at its prettiest, which is when all this takes place. There's even a quote about fall too.

What it's about: Pretty much the same thing as the one before but with Katz's and Billy Crystal.

Why it's fall-y: They stand in the orange leaves in Central Park a lot.