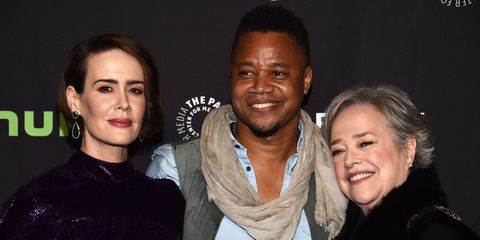 The next season of American Horror Story will take on the most literal version of the title yet, focusing on the 2016 election — and here's your first look at one of the season's monsters. Released by showrunner Ryan Murphy on Instagram, this sketch teases what appears to be a creepy elephant/grinning clown hybrid ripped directly from my nightmares.

How does this connect to the election? Well, the Republican Party's symbol is an elephant, so ... is this monster a flesh-and-blood embodiment of the GOP at its worst? If so, then can we also expect a horrifying donkey monster to represent the Dems?

Murphy has confirmed that Trump and Hillary Clinton will be characters in the show, but not the focal point. The series will pick up on Election Night and deal primarily with the aftermath, and both Sarah Paulson and Evan Peters are confirmed to be returning.

American Horror Story: Election will premiere this fall on FX.