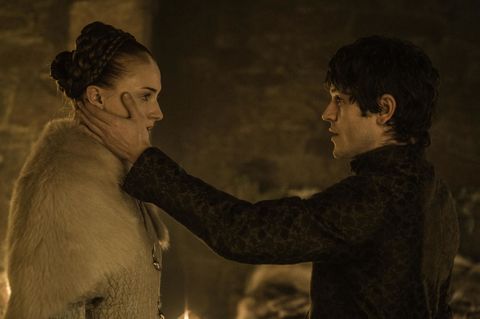 Game of Thrones' highly-anticipated seventh season premieres on July 16, but showrunners D.B. Weiss and David Benioff recently took a break from looking forward to reflect on the series' past controversies.

In a new interview with Time, Weiss and Benioff, as well as series star Sophie Turner, discussed the show's controversial use of sexual violence.

The series has, on multiple occasions, depicted sexual violence against female characters. In season one, Daenerys Targaryen is raped by her new husband Khal Drogo (with whom she later falls deeply in love). In season four, many viewers interpreted a scene between Jaime and Cersei Lannister as nonconsensual (although the episode's director Alex Graves said that was not the intention). And, most recently, in season five, Sansa Stark is brutally raped by her husband, Ramsay Bolton, while an emotionally broken Theon Greyjoy is forced to watch.

This is all to say: Game of Thrones has a complicated history when it comes to portrayals of female characters and use of sexual violence.

Benioff defended the use of sexual violence in the show's plot, saying that it's what feels authentic to the world of the show. "It's still the same basic power dynamic between men and women in this medieval world. This is what we believed was going to happen."

But, Weiss noted that, when it came to the controversial Sansa scene, at least, they didn't make the decision lightly.

"We talked about, is there any other way she could possibly avoid this fate that doesn't seem fake, where she uses her pluck to save herself at the last?" he said. "There was no version of that that didn't seem completely horrible."

In 2015, Jeremy Podeswa, who directed the controversial episode, said that even though Weiss and Benioff ultimately decided to include the storyline, they did take past criticisms of the show's use of sexual violence into consideration when crafting the scene.

"[Weiss and Benioff] were responsive to the discussion and there were a couple of things that changed as a result," Podeswa said, according to Forbes. "It is important that [the producers] not self-censor. The show depicts a brutal world where horrible things happen. They did not want to be too overly influenced by that [criticism] but they did absorb and take it in and it did influence them in a way."

Turner, who plays Sansa, also weighed in on the inclusion of the scene in an interview with Time.

"This was the trending topic on Twitter, and it makes you wonder, when it happens in real life, why isn't it a trending topic every time?" she said. "This was a fictional character, and I got to walk away from it unscathed…Let's take that discussion and that dialogue and use it to help people who are going through that in their everyday lives. Stop making it such a taboo, and make it a discussion."

Kayleigh Roberts Kayleigh Roberts is the weekend editor at Marie Claire, covering celebrity and entertainment news, from actual royals like Kate Middleton and Meghan Markle to Hollywood royalty, like Katie Holmes and Chrissy Teigen.
Advertisement - Continue Reading Below
More From Culture
The Best Wedding Movies of All Time
Read 'Anna K' Even If You Didn't Read the Original
Advertisement - Continue Reading Below
19 Most Underrated Films of All Time
The Music Podcasts We Keep Pressing Play On
Why You Keep Seeing "Until Tomorrow" on Instagram
The 19 Best Murder Mystery Movies
How to Join Marie Claire's Online Book Club
'In Five Years' Is MC's April Book Club Pick
'Little Fires Everywhere' Is a '90s Time Capsule
How Murtagh Dies in the Outlander Books