Welp, get ready for this to feed your next few weeks' worth of nightmares: an alleged look into the upcoming season of American Horror Story may have just leaked and it's...low-key shock-value-CREEPY-CLOWN terrifying? I mean, were you expecting anything less from the show at this point?

The Twitter account @AHSLeak released the footage early Tuesday morning and it looks to be legitimate—the video originally debuted on AHS network FX's Latin America Twitter feed, @CanalFX_la, on Tuesday, Hello Giggles reported. In previous years, the account has also shared clips perhaps before they should have (the video has since been deleted), but it's not entirely clear if this is the real deal or just social promo. 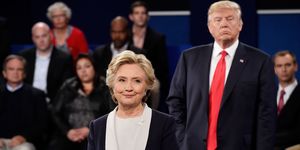 In the video, white balloons fill the darkest room ever and are slowly pushed aside to reveal a single red balloon. As if things couldn't get any weirder—horror music and all—a less-than-friendly-looking clown decides to make a surprise appearance at the very end. It's all rather reminiscent of Stephen King's IT, really.

Are we in for another take on Freak Show? Ryan Murphy did announce that everyone's favorite Twisty the Clown would be returning this season. He also revealed that the season would deal with the 2016 election—in other words, if that wasn't enough of a freak show in itself, this season will definitely be turning some heads! Thankfully, fans won't have to wait too long to find out exactly what the series will bring. After dropping too many to clues to count, Murphy has confirmed on Twitter that the official title for the show's seventh season will be revealed tomorrow:

Whatever this season may turn out to be, it's shaping up to be just as intense as its predecessors.