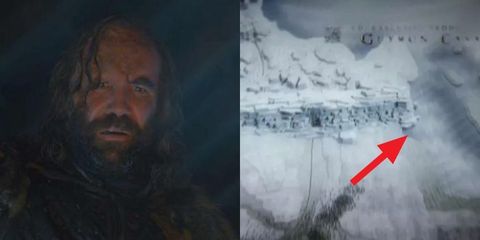 Fans of Game of Thrones know that there are at least two different battles looming before the end of Season 8. Yes, we need to find out who is going to sit on the Iron Throne, but everyone is going to need to put their differences aside and team up against the White Walkers or the Night King will be the winner who takes all.

For years, The Wall and the dwindling Night's Watch have been all that stood between Westeros and the White Walker army. We thought the Walkers would have to take The Wall down to make it south, but it turns out that might not be the case.

Remember in the Season 7 premiere, when the Hound overcame his fear of fire and saw something very interesting (and by "interesting" we mean "terrifying") in the flames? If you need a refresher, he saw the dead marching past The Wall, where it meets the sea.

The sea is freezing over. The White Walkers and their wight army will be able to march south into Westeros, and soon. So hurry up and unite the Seven Kingdoms, Dany.

Kayleigh Roberts Kayleigh Roberts is the weekend editor at Marie Claire, covering celebrity and entertainment news, from actual royals like Kate Middleton and Meghan Markle to Hollywood royalty, like Katie Holmes and Chrissy Teigen.
Advertisement - Continue Reading Below
More From Culture
The 19 Best Murder Mystery Movies
How to Join Marie Claire's Online Book Club
Advertisement - Continue Reading Below
'In Five Years' Is MC's April Book Club Pick
'Little Fires Everywhere' Is a '90s Time Capsule
How Murtagh Dies in the Outlander Books
What Happened to John Finlay From 'Tiger King'?
'Outlander' Season 5 Is Back to the Show We Love
The Best Cooking Shows on Netflix
The Wildest Reviews of Joe Exotic's Zoo
What Happened to Doc Antle from 'Tiger King'?