2019 has been a fantastic year for dues-paying members of the Beyhive, because Beyoncé has been very, very busy. Back in April, we were fortunate enough to have our beloved drop her Netflix documentary Homecoming, and she even threw in a 40-track live album to accompany the release of her film just because. Now, we are by no means starved for new Beyoncé music—her current discography is chock-full of hits that stick like grits—but we're always in the mood to hear something new for the summer. After all, we have yet to have a real summer 2019 anthem. What are we supposed to dance at all these day parties??

Well, it looks like we're in luck. Not only are we getting to see Beyoncé as Nala in the upcoming live action remake of The Lion King, but Sir and Rumi's mama is also releasing a self-curated and produced album for fans of the classic film that is titled The Lion King: The Gift.

Just last week, the singer dropped "Spirit," a soulful and swelling melody that could (and probably will) definitely be sung by somebody's church choir on any given Sunday. "Spirit" is just one of the 14 tracks on The Gift, and from the looks of it, the album is going to be EVERYTHING. Get your shaku shaku and your zanku ready, folks.

The Gift is set to feature some of the biggest names in afrobeats right now, and that is a huge deal. For context, afrobeats is a musical genre straight out of West Africa (with origins in Nigeria) that blends rap, dancehall, and R&B with the native sounds of the region. As of late, afrobeats has spread around the world, inspiring the music of major western artists like the 6-God himself, Drake ("Come Closer" and "One Dance"); Drake actually collaborated with Wiz Kid, one of the genre's foremost stars, to help produce both of the summer 2016 anthems.

Apparently, Beyoncé is also a fan of the sexy and fun sound, tapping the talent of major afrobeats musicians for The Gift. Wiz Kid will feature on the album as well as Burna Boy, Mr. Eazi, Yemi Alade, Shatta Wale, Tekno, and Tiwa Savage (who, in 2016, became the first Nigerian artist to sign with Jay-Z's Roc Nation). It's a surprising move but a smart one; afrobeats is becoming a global phenomenon as each day goes by, and who better to ride the wave than the world's biggest artist?

The Gift will also feature a number of American artists, including Jay-Z, Pharrell, Kendrick Lamar, Childish Gambino, and Tierra Whack. Also spotted on the track list? Miss Blue Ivy Carter. Seven years old and already making music with the heavy hitters—we really have no choice but to stan!

With song titles like "Don't Jealous Me" (likely a reference to popular Nigerian comic and internet personality Tolulope Ogunmefun), "Brown Skin Girl," and "Mood 4 Eva," The Gift is already promising to be what Beyoncé described in a statement as a "sonic experience." Like the remake, the album pust a contemporary spin on the sounds that we know and love while paying tribute to the film's obvious African influence. "Each song was written to reflect the film’s storytelling that gives the listener a chance to imagine their own imagery, while listening to a new contemporary interpretation," Bey expressed. "It was important that the music was not only performed by the most interesting and talented artists but also produced by the best African producers. Authenticity and heart were important to me.”

The Lion King: The Gift will be available for streaming on the same day that the film is released, July 19. 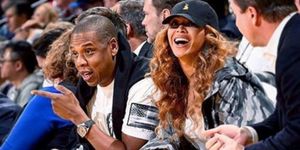 A Brief History of Beyoncé Slaying Courtside Style
This content is created and maintained by a third party, and imported onto this page to help users provide their email addresses. You may be able to find more information about this and similar content at piano.io
Advertisement - Continue Reading Below
More From Culture
The Top-Grossing Book-to-Movie Adaptations
Historical Films to Stream If You Loved 'Hamilton'
Advertisement - Continue Reading Below
A Look Back at Princess Anne's Life in Photos
Is Jack From 'The Circle' Cousin Greg?
Cristin Milioti & Billy Magnussen Play Trivia
The Most Unmissable Movies of 2021 (So Far)
Mother's Day Gifts to Show How Much You Miss Her
Get to Know Delessa From 'The Circle'
Movies That Just Feel Like Summer
Different Pride Flags and What Each Represents