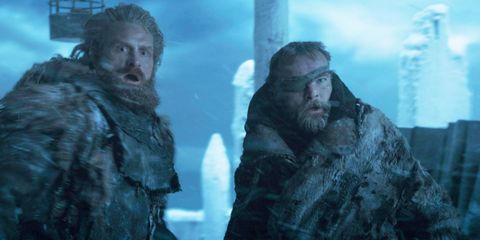 WARNING: This story contains spoilers for the Game of Thrones Season 7 finale.

This season of Game of Thrones ended with a major cliffhanger when the Night King's new wight dragon sent a whole chunk of the Wall crumbling down, allowing the Army of the Dead to march through. The game-changer implies serious ramifications for Westeros in Season 8, but it also left some fans wondering: Are Tormund and Beric Dondarrion okay? 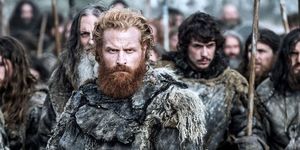 This is \'Game of Thrones\' Tormund Without a Beard

When that final sequence begins, we see the two men atop the Wall at Eastwatch, as the White Walkers and wights begin emerging from the forest down below. Moments later, as the undead Viserion breathes fire into the Wall, we see them rushing to get to safety. As the Wall starts falling apart close behind them, the camera pans to Tormund's shocked face—and that's the last we see of them before the rest of the Wall falls to the ground.

The cliffhanger left devoted fans wondering if their beloved Wildling and eyepatch-wearing warrior were gone for good.

IS THE HOMIE TORMUND GOOD OR NOT?!! #GameOfThrones pic.twitter.com/Wuy9xin7A0

Btw, am I the only one concerned about Tormund's wellbeing? #GameOfThrones

IS TORMUND SAFE THOUGH? #gameofthrones pic.twitter.com/0FOSsHaqNi

But fear not, Tormund and Beric fans—according to this theory, your favorites are still safe. Redditor playazle explains:

Beric and Tormund survived. In the last shot with Tormund you can see some Night's Watch structure behind him on the top of the wall, and in this photo you can see that there are still some night's watch structuring intact on the side of the wall that isn't collapsing. They're both alive, they just have to run to Castle Black now.

This makes even more sense if you consider Game of Thrones logic: characters as big or popular as Tormund or Beric (who have been in the show for at least a few seasons) wouldn't be brushed off with a lousy, offscreen death; they would meet their ends onscreen, where viewers could witness it, believe it, and probably cry over it for a few days.

Some fans caught on:

There's no speculation tormund is dead, they have to give a character that popular an onscreen death

One commented on playazle's thread: "After that speech Beric gave about the Lord of Light bringing him back for a reason, he's not going to get an off screen death. Maybe he'll give his life to save Tormund or something, but as of the finale they're both alive enough to salvage their story lines."

And another added: "Also they wouldn't have had Tormund survive the frozen lake battle just to have him die offscreen in his next scene."

Here's hoping we see these two faces in Season 8.