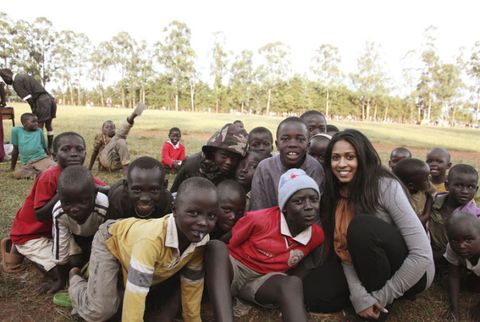 1. BUDDY UP. Ever fantasized about dropping everything to help kids in need? Grab your computer and Webcam and check out Infinite Family (infinitefamily.org), a video mentoring site that connects volunteers with African preteens and teens. To join, you'll fill out an application, complete online training, and get access to a secure intranet for weekly video dates. Conversations occur between 8 a.m. and noon U.S. time; you'll clock in a good deed before lunch!

2. POST A COMMENT. Had a super time volunteering? Share it on great nonprofits (greatnonprofits.org), the yelp of charities; users can rate 1.2 million U.S.-based nonprofits. Simply log in, locate your charity, and enter your story, no username or password needed. Your review will instantly help others get the best experiences for their time.

3. SHOP FOR A CAUSE. Justify your online shopping habit using GoodShop (goodshop.com), which works with more than 2,500 retailers — Amazon, Apple, Bloomingdale's, Nordstrom, and more — to donate a percentage of your purchase to charity. Just designate your cause from among the site's 100,000 nonprofit partners (or add your own favorite organization), then click on the store logos to browse online; the percentage each merchant gives is clearly listed (J.Crew is 5 percent; Barneys New York is 2.5). Knowing that $100 sweater will net $5 for those in need is a perfect excuse to splurge.

4. SNACK MORE. Eat your way to a better world with Common Kindness (commonkindness.com), a food coupon site. Create an account, choose your charity, and rack up savings at your local market — everything from 50 cents off Cabot Greek yogurt to $1 off Pillsbury cookie dough. Common Kindness bills the companies a quarter per coupon you use, giving 5 cents to your cause.

5. TAKE A BREAK. Got a couple minutes? Make them count. Visit Sparked (sparked.com), a volunteering site for professionals, while you're waiting in line or having lunch. The site's Web-based tasks take between five minutes and two hours: You can offer ideas for a nonprofit's fundraiser, write a letter to an underprivileged child, create a new logo for an organization that can't afford a graphic designer, and more. You'll get a weekly e-mail with options based on your interests. Or search the site by cause or location to choose an activity.

6. FIND A FEEL-GOOD STEAL. Dealgooder (dealgooder.com) has local bargains with a twist: Each purchase beneftis a nonprofit, from Team Kids to Human Options, which helps battered women. When a $10 pizza coupon earns cash for a good cause, everyone's satisfied.

7. GET APP-Y. Check out these altruistic apps: Phospho, a 99-cent flashlight app, gives its entire sticker price to Sightsavers International, the Himalayan Cataract Project, and Vitamin Angels to fight global blindness. Snooze, an alarm app, charges you 25 cents for the cause of your choice each time you sleep in. Guilt-free extra zzz's!

8. PLAY A GAME. Stow your Wii! Give back and goof off with a Web game instead. Free Rice (freerice.com) donates rice to the United Nations World Food Programme for right answers; puzzle site Charitii (charitii.com) gives advertiser fees to groups like The Nature Conservancy.

9. SPARE SOME CHANGE. Impulse-shop freely when you enter your credit- or debit-card info at SwipeGood (swipegood.com). The secure site rounds up the cost of any purchase to the nearest dollar, giving the difference to your chosen charity.

Cofounder and CEO of Jolkona Foundation, an organization that connects small donors to global development projects

Job: "In 2006, my husband came back from visiting family in Bangladesh. He couldn't get over the poverty there — people couldn't afford medical care. So we began supporting a local clinic with small gifts of $150, which was all it took to buy a prosthetic limb and rehabilitation therapy for one polio amputee. We loved the feeling of giving back, so we launched Jolkona, named for the Bengali word for drop of water, in 2009."

Background: "My sophomore year at UCLA, a friend invited me to tutor with her at a South Central L.A. high school. The kids couldn't even do basic math. It prompted me to get involved. By the time I graduated, I knew I wanted a career addressing social problems."

Reward: "We've raised almost $200,000 in micro-donations for more than 60 partner organizations in 42 countries, from Guatemala to Kenya. Our goal is to show the next generation of philanthropists that small donations make a difference."

Job: "In 2001, I trained to become one of Christie's six charity auctioneers; the company provides us free to nonprofits to lead international charity auctions. I do up to 80 events a year and have about 20 black-tie dresses hanging up at home!"

Background: "When I was growing up in Lake Charles, Louisiana, my parents always emphasized philanthropy. On the Christmas I was 10, they bought my siblings and me sponsorships for kids in Haiti instead of gifts."

Reward: "The most I've ever raised in a night was $12 million for the Naples Children & Education Foundation in Florida. It's great to be a woman in this job, since men bid more often — I'm not threatening to them. I've had guys say at the end of the night, 'You owe me $15,000. I wasn't even going to raise my paddle!' But it's for a good cause."

Founder and CEO of Legacy Venture Consulting (LVC), a firm that manages charity initiatives for celebrities and athletes

Job: "I founded LVC two years ago to connect star athletes with at-risk communities. I saw the impact when I worked with underserved teens in Durham, North Carolina. When I invited the Duke basketball team to talk to the kids, they suddenly became attentive."

Background: "I grew up in Compton, California; there were lots of gangs and guns. Both my parents struggled with drugs, and in 1997 my brother was hit by a stray bullet in a drive-by shooting. I graduated from Howard University in 2002 — the first in my family to go to college — and I wanted to assist people from troubled backgrounds like mine."

Reward: "I helped Dwayne Wade from the Miami Heat renovate a high school girls' basketball court. I'm also the director of youth opportunities for the Chicago Housing Authority, where I develop career programs for more than 8,000 kids in public housing. One of the girls in the program just graduated from Yale."

Founder of Run for Congo Women, a fundraising and awarenessorganization

Job: "In 2005, I learned about the situation in Congo for the first time from a TV show — women and children were being raped and killed on a massive scale. I couldn't believe the suffering, so I had the idea to do a 30-mile run to raise money. I ended up collecting $28,000, enough to sponsor 80 women. After that, I founded Run for Congo Women, a volunteer organization that coordinates races and walks all over the world. We've raised $11 million in race pledges and in donations prompted by media coverage."

Background: "I always wanted to do something for the world, but I figured I'd make money first and give back later. After my father died in 2004 — he was a social worker who treated Vietnam vets with post-traumatic stress disorder — I had the nagging feeling that I hadn't become the person I wanted to be."

Reward: "I've been to Congo three times, and this past summer I traveled to Mogadishu, Somalia, to launch a sexual violence hotline and medical services center for women, Sister Somalia. It was the scariest thing I've ever done — I had to hire eight guys with guns to take me around — but when I walked into the center and saw 30 women waiting there, it was worth it."

Founders of A Peace Treaty, an accessories line made by Third World artisans

Background: "We both have philanthropic families — after college, my dad and I delivered HIV medicines to Ethiopian kids, and Farah's parents treated schizophrenic women in Pakistan in the '70s. Growing up as travelers, we loved exploring shopping bazaars all over the world, so we work well together." — Dana Arbib

Reward: "We travel to source every collection, which can be hard. I got malaria on a production visit to Pakistan a few years ago, and we lost one entire collection when our shipping truck was bombed in Afghanistan in 2009. But bringing a living wage to international craftspeople motivates us. Last year, we had $800,000 in revenue, $600,000 of which went to pay workers." — Malik

Advertisement - Continue Reading Below
More From Culture
An Investigation Into the Next 'Bachelorette'
The Best Korean Dramas to Get You Hooked
Advertisement - Continue Reading Below
Who Is 'Bachelor' Contestant Victoria Fuller?
Everything to Know About Peter Weber's Ex
Read an Excerpt From the Uber Whistleblower's Book
The Must-Watch TV Shows of 2020
Candice Marie Woods on Playing Diana Ross
45 Iconic '90s Movies to Binge-Watch Right Now
You Can Get a ‘Golden Girls’ Birthday Party Kit
Meet the Star of 'The Bachelor's ChampagneGate