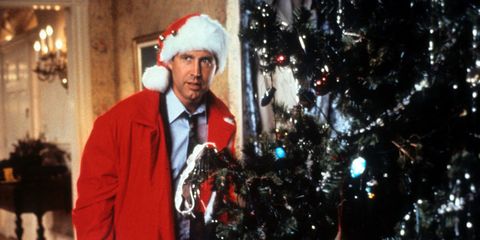 Take a break from gift shopping and decorating the tree. Let these movies put you in the holiday spirit, instead.

Outside of Jesus and Santa, Bing Crosby is basically the king of Christmas. This musical about an inn that's only open on holidays gave us the song "White Christmas," which of course we're all dreaming of.

The drama's lead, Jennifer Jones, won an Oscar for her portrayal of a woman having visions of the Virgin Mary. The film however lost the Best Picture race to Casablanca.

Judy Garland stars in this musical featuring the classic holiday tune, "Have Yourself a Merry Little Christmas."

Holiday romance is the focus of this Barbara Stanwyck film, which was remade for TV in 1992 with the help of director Arnold Schwarzenegger.

Every time this movie is on during the holiday season, an angel gets its wings.

If you ever spill the beans about Santa to a kid too early, this movie will restore their faith.

The story of the Three Wise Men retold as a Western and starring John Wayne is begging for a remake.

Janet Leigh and Robert Mitchum co-star in this romantic comedy set during the holidays. It wasn't a huge success when it was released, but still gets played at Christmastime.

Alternately titled A Christmas Wish, this movie involves an animated squirrel who helps improve the lives of two impoverished families.

You know the drill. Guy hates Christmas and ghosts scare him straight.

The classic Disney gang appears in this short film involving Mickey and Pluto trying to pick out the perfect Christmas tree.

There isn't much Christmas in Peter Pan, but the magic is definitely there.

White Christmas wasn't just popular during the holiday season. It was the second highest-grossing film of 1954.

Humphrey Bogart, Peter Ustinov and Aldo Ray play three escaped convicts who learn how to be good while hiding out with a poor family in a French colonial town during Christmas.

It may have nothing to do with Christmas, but try turning on this Eddie Fisher/Debbie Reynolds collaboration while the holiday feast is in the oven and you'll know why it's on the list.

Not the most joyful Christmas movie, All Mine To Give is based on the true-life story of six Wisconsin siblings who must take care of each other when both of their parents die.

Jimmy Stewart straps on his Christmas boots again for this love story set during the holiday season. He plays a publisher who falls under the spell of his witch neighbor played by Kim Novak.

Also known as Santa Claus vs. the Devil, this Mexican import is probably one movie you should watch after the kids have gone to bed.

The action of this Jack Lemmon and Shirley MacLaine Oscar winner culminates at a company Christmas party, which absolutely justifies it as a Christmas movie...right?

Annette Funicello stars in Disney's take on the 1903 operetta of the same name by Victor Herbert.

Same story, different medium. Magoo claims the honor of being the first animated holiday special ever produced for TV.

Disney once again ruled the holiday season with this magical tale of King Arthur, which hit theaters on Christmas day.

The fact that this movie still entertains kids in the age of Pokémon GO and 3D movies is a testament to how iconic it really is.

The Peanuts gang basically has a stronghold on the holiday season beginning in October with It's the Great Pumpkin, Charlie Brown.

Dr. Seuss's green guy became a staple at Christmas decades before Jim Carrey was ever involved.

Dick Van Dyke stars in this heist movie about the household staff of an elderly heiress plotting to rob a department store on Christmas Eve.

He had no gifts to bring, but this 1968 NBC TV special is the holiday gift that keeps on giving year after year.

Not to be outdone by The Little Drummer Boy, CBS got into the song-to-movie adaptation game with Frosty. The special featured the voices of Jimmy Durante and Jackie Vernon.

Albert Finney won a Golden Globe for playing Ebenezer in this musical adaptation of the Dickens story.

Paramount Pictures
30 of 76
1971: The Homecoming: A Christmas Story

Next
How the Royal Family Celebrates Christmas
Advertisement - Continue Reading Below