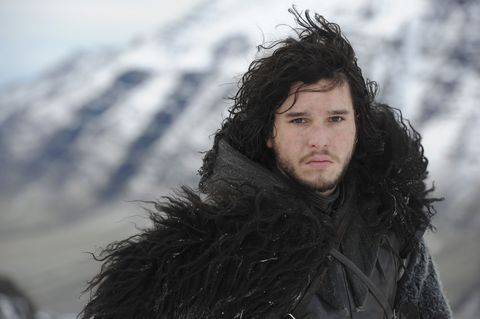 Probably because he dislikes superiority complexes almost as much as he dislikes security and happiness, George R.R. Martin has brought the axe down on both your hopes for Game of Thrones season 72 and everyone who's still breathing in Westeros.

At the 2015 Writers Guild Awards in Los Angeles on Saturday, Martin spoke to Showbiz 411 about the beyond-Red-Wedding-level bloodbath that's to come April 12.

"People are going to die who don't die in the books, so even the book readers will be unhappy," he said. "So everybody better be on their toes. [Co-executive producers] David [Benioff] and D.B. [Weiss] are even bloodier than I am."

In the same interview, Martin discusses the vagaries of TV, which is just another way of saying, "GoT might or might not be renewed, but that doesn't matter because we're going off-book anyhow, so I can just keep writing at my own pace." Kit Harrington, ever the straight shooter, predicted the show will end—on a high note—after its seventh season.

"I think we've got to the point that people who have watched it thus far will finish it, so I don't think we're going to lose its viewership," he told Digital Spy. "But it's about keeping that viewership happy, and keeping the quality up, and not doing what other TV shows have done in the past, which is finish on a whimper."

You know what that means—start prepping your all-my-fictional-friends-are-dead bunker now.

Sansa Stark: 'Game of Thrones' Season 5 Will Be Like the Red Wedding, Only Worse

The Original Plot for 'Game of Thrones,' as Told By George R.R. Martin, Has Been Leaked Online