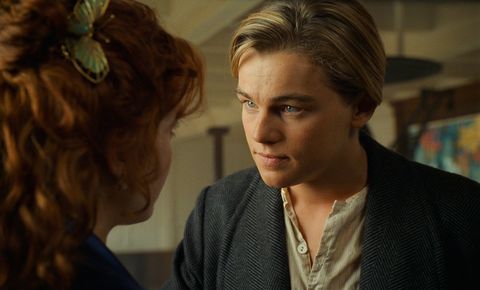 This is just ludicrous—but not impossible...but maybe? Prepare to have your mind warped to no return. BuzzFeed is convinced that our collective Titanic boyfriend Jack Dawson is a time traveler. What?

Their theory comes from Tumblr—as much of the best in-depth fandom does these days—and argues that Dawson had traveled back in time specifically to save Rose from jumping off the back of the ship. (The unfortunate wrinkle there for Titanic's other passengers, specifically the 1,500 who die in the sinking, is that, the theory continues, "if Rose jumped to her demise then the ship would have stopped to look for her" and then in turn would have avoided the big bad iceberg.)

Another piece of evidence supporting this claim is the fact that Jack has no money as the film begins—an apparent indication that he'd just arrived from a time with different currency...or he could just be poor. It gets better: His loose bangs hairstyle is apparently better suited to 1930s trends. Plus, Jack speaks of both the roller coaster on Santa Monica Pier and Lake Wissota, a prime fishing spot but—wait for it—these places weren't constructed until 1916 and 1917 respectively, after the Titanic sank.

Now if Jack had only traveled back from, say, the late 1990s instead of the late 1910s, he'd have had time to read the many explainers as to why he could have balanced on that floating door—high school physics 101—with Rose and had himself a much happier ending even given the disastrous shipwreck. Of course, he would have been an old man—but Leonardo DiCaprio still looks like stud at 40, so we're pretty sure the guy ages gracefully.

With that said, let's all go home early and start watching Titanic now.