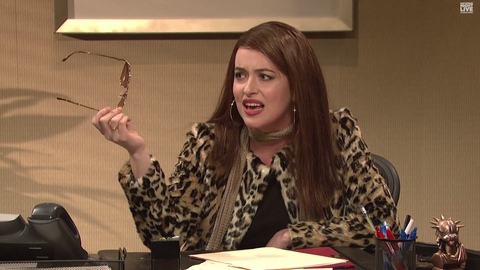 Around the time we started using the word "bananas" to describe things other than fruit, we also started to can't. We are a whole generation of people who literally cannot even. Who can even? It is literally impossible to can.

On Dakota Johnson's SNL debut last night, the show did an amazingly on-point sendup of the world's most overused catchphrase...and our habit for hyperbole. It is literally the best thing ever.

Other highlights include an inspiring PSA about those people you really don't care about but pretend that you do...

And an opening monologue that riffs on Fifty Shades of Grey and kind of sweetly points out that mom Melanie Griffith hosted the show 27 years ago—and had daughter Dakota exactly nine months later.

Jessica Pels Editor-in-Chief As the editor of Cosmopolitan, Jess oversees the editorial for all of Cosmo's efforts across print, digital, video, and emerging platforms.
Advertisement - Continue Reading Below
More From Culture
There's Going to Be a 'Love Is Blind' Reunion
The Author of 'My Dark Vanessa' Shares Her Story
Advertisement - Continue Reading Below
Behold This Beyoncé-Inspired Gymnastics Routine
'The Bachelor' Has Already Finished His Season
An Investigation Into the Next 'Bachelorette'
The Sexiest TV Scenes of All Time
Unmissable Horror Movies Coming Out This Year
Treat Yourself to a Chick Flick Tonight
Who Will Be on 'Bachelor in Paradise' in 2020?
Can We Talk About Kelly's Mom From Love Is Blind?