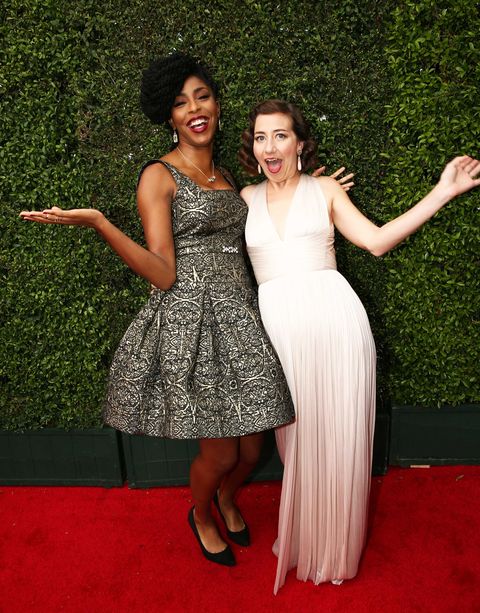 There's been lots of talk lately about how late-night shows are pretty much a boys' club. Case in point: Jimmy Fallon, Jimmy Kimmel, Conan O'Brien, Seth Meyers, James Corden, Stephen Colbert, Larry Wilmore, and now Jon Stewart replacement Trevor Noah. While Chelsea Handler had a successful run on E!, she's pretty much the only name thrown around when asked about successful female late-night hosts. And when it comes to visibility, it's kind of ridiculous that 50.8% of the population aren't represented in this hugely historic realm of TV.

While Amy Schumer and Amy Poehler *were* looked at for the Daily Show gig, and while executives say it wasn't about gender but about "the right person for the job," and yes, while we're excited to see what Trevor Noah does, it's kind of disheartening that a cultural mainstay still doesn't have a female host—even as our society basically demands it.

Here's a look at five amazing women who would be right at home behind a late-night desk. Are you ready execs? 'Cause we are.

The hilarious and enormously talented Daily Show correspondent was actually bombarded with tweets asking her to fight for Jon Stewart's spot after the Trevor Noah decision, in which she tweeted back: "Thank you but I am extremely under-qualified for the job!"(Side note: Trevor Noah began a full year after Williams.) Featured on the cover of Wired and lauded for her amazing comedic bits and satire, we completely disagree with Williams's characterization of herself—she would be a perfect choice for her own show.

The first black woman to lead the prestigious comedy mag The Harvard Lampoon (notable alumni include the likes of Conan O'Brien and B.J. Novak), the not-yet-graduated Wilkinson and her co-editor have really ushered the 138-year-old magazine into the current media environment—upping the number of issues produced, launching a parody website, and tackling issues like gender and race in nuanced ways. While Wilkinson might be a tad junior, we do know she's on the job hunt, and would bring in young viewers that late night is known to have a hard time grabbing. (She would at least make for a great correspondent or "man number 2" as there have literally been none in late night. Not even Craig Ferguson's robot counts—he was voiced by a man.)

The Saturday Night Live star is one of the most lovable and hilarious on the show—and her first late night interview with Seth Meyers just proves how amazing she'd be doing her own thing.

One of the funniest bits on Kimmel is always when Silverman visits, and the comic's interview with Jerry Seinfeld on Comedians in Cars Getting Coffee just shows how great her anecdotal range is. (You need those skills to keep some interviews going, people.)

The actress is probably best known for her role of Mel on Flight of the Conchords as well as The Last Man on Earth, but the Colorado-native was also a cast member of The Daily Show with Jon Stewart, giving her both the comedic timing and experience to wrangle a late night show of her own.

Jimmy Kimmel on the Lack of Women Hosting Late-Night Shows: "Networks Are Stupid"

The Sexiest TV Scenes of All Time
How 'Bachelor' Peter Got That Scar on His Face
Advertisement - Continue Reading Below
Who Is 'Bachelor' Contestant Victoria Fuller?
Who Is Hannah Ann Sluss From 'The Bachelor'?
Megan Angelo on Her Debut Novel, 'Followers'
Who Is 'Bachelor' Contestant Madison Prewett?
Pre-Order These Amazing Books Coming Out in 2020
Jenna Dewan's BF Reacts to Channing Tatum's Drama
The Best Korean Dramas of All Time
Mainstream Movies With * A LOT * of Nudity