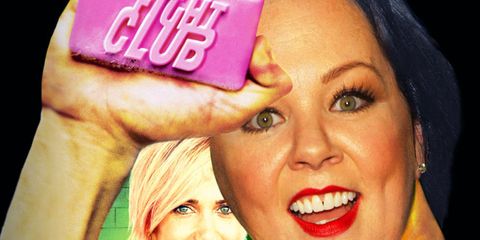 "Amy Poehler needs to star in Die Hard. I like when Amy's kind of acting tough and sort of badass. Maybe she'd be an underachieving security guard. A woman who wished she was a cop but became a security guard—so she has to prove herself."

"Kristen Wiig as Ed Norton and Melissa McCarthy as Brad Pitt. I'd completely buy that—might as well make it. It's going to be my next reboot."

"Kate Beckinsale. I'd keep the tagline—"Say hello to my little friend!"—exactly the same, just because I'd love to hear Kate screaming it from a balcony as she unloads rounds of machine-gun fire."

Advertisement - Continue Reading Below
More From Culture
How the 'To All the Boys 2' Soundtrack Was Made
Does 'Bachelor's Madison Prewett Self-Eliminate?
Advertisement - Continue Reading Below
How Much Does 'The Bachelor' Make?
Tales of a Hollywood Con Queen
Who Will Be on 'Bachelor in Paradise' in 2020?
When Will 'The Bachelor' Women Tell All Air?
'The Bachelor' Has Already Finished His Season
The Very Best Rom-Coms of All Time, Ranked
An Investigation Into the Next 'Bachelorette'
The Best Korean Dramas to Get You Hooked