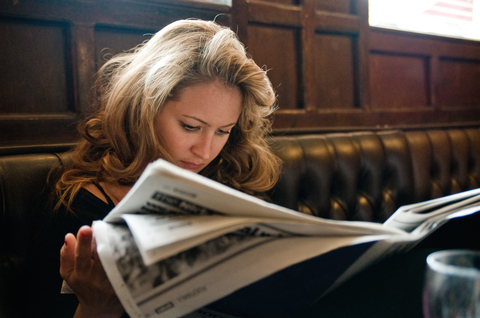 —In newly filed court documents, American Apparel revealed some particularly scandalous on-the-job activities of former CEO Dov Charney, including but not limited to recording himself having sex with employees on company equipment, calling staffers "Filipino pigs," and sending them sexually graphic messages (which he later asked them to delete). (LA Times)

—The escaped convicts in upstate New York are closer to being found, now that they've left DNA lying around in a cabin in the woods. Of note: Said DNA was on a pair of underwear. Which someone then had to test. (New York Post)

—The Supreme Court is expected to make its ruling on same-sex marriage case Obergefell vs. Hodges this week, and it's looking like Justice Anthony Kennedy may be the tie-breaker. If he rules in favor of gay marriage, states will no longer be able to ban it. (Daily Intelligencer)

—Speaking of SCOTUS, Justice Elena Kagan made a bunch of Spider-Man references in a ruling yesterday. (Daily Intelligencer)

—Blerg: Mankind is causing the greatest animal extinction since the dinosaurs. (The Guardian)

—Titanic composer James Horner died in a plane crash yesterday at just 61. He was also famous for composing the scores of Avatar, Apollo 13, and A Beautiful Mind. (Variety)

Getty Images
This content is created and maintained by a third party, and imported onto this page to help users provide their email addresses. You may be able to find more information about this and similar content at piano.io
Advertisement - Continue Reading Below
More From Culture
See Inside Julianna Margulies's Personal Library
Could 'Manifest' Come Back for a Fourth Season?
Advertisement - Continue Reading Below
The Most Unmissable Movies of 2021 (So Far)
The Eternal Sunshine of Juno Temple
Let's Talk About That 'Virgin River' Cliffhanger
Zendaya Shared a Teaser of 'Euphoria' Season 2
'Ginny & Georgia' Season 2: Everything We Know
Wait, Where's Hope in 'Virgin River'?
'Virgin River' Season 4: Everything We Know
The Greatest Comedy Series of All Time