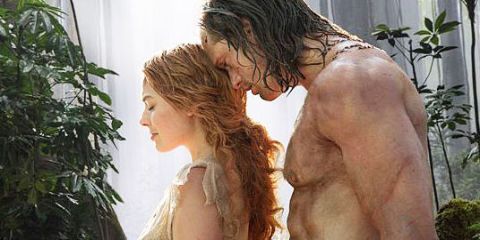 Of all the questions this just-released trailer for the Legend of Tarzan raises—How exactly did Alexander Skarsgård get Chiclets for a torso? Could somebody turn up the lights in here?—perhaps the most pressing is "But weren't we promised a loincloth?"

The plot seems to play out as previously reported (Tarzan's a full-blown, pinkies-up English lord who taps into his jungle roots when Christoph Waltz comes knocking), with Margot Robbie's Jane being held captive by the imperialists, Djimon Hounsou playing some type of ghostly warrior, and Samuel L. Jackson being Samuel L. Jackson but in a waistcoat.

IDK, maybe he'll have different pants in the next trailer? Watch the first one here.

Chelsea Peng I'm Chelsea Peng, the assistant editor at MarieClaire.com.
Advertisement - Continue Reading Below
More From Culture
The Best Wedding Movies of All Time
Read 'Anna K' Even If You Didn't Read the Original
Advertisement - Continue Reading Below
19 Most Underrated Films of All Time
The Music Podcasts We Keep Pressing Play On
Why You Keep Seeing "Until Tomorrow" on Instagram
The 19 Best Murder Mystery Movies
How to Join Marie Claire's Online Book Club
'In Five Years' Is MC's April Book Club Pick
'Little Fires Everywhere' Is a '90s Time Capsule
How Murtagh Dies in the Outlander Books