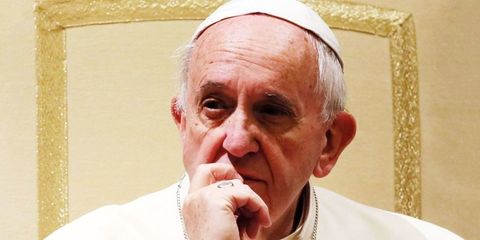 Sorry, Han Solo, but the Pope has no time for your shenanigans. Despite the rest of the world's praise for Star Wars: The Force Awakens, the Vatican's paper is notably unimpressed by the J.J. Abrams film, calling it "confused and hazy." Hmmm, ok then.

In a review that is the very definition of shade, L'Osservatore Romano said Star Wars "fails most spectacularly" and called the film a "twisted update which fits today's tastes and a public more accustomed to sitting in front of a computer than in a cinema."

The review went on to say the movie drew from the "sloppiest current action films" and also took strange issue with the number of close-ups employed by Abrams. It's like, the Vatican does not want to see your up-close robot face, BB-8. Please pull it together.

Considering the film is breaking box office records, this bad review probably won't make or break anything. Other than whether the RIP'd characters make it to the pearly gates of heaven, of course.