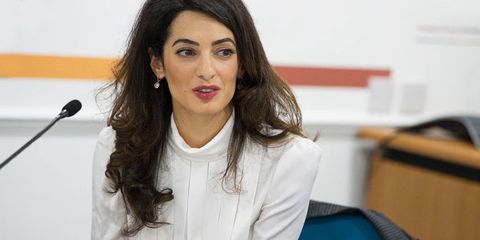 Amal Clooney, she who fears no one and also happens to looks like a goddess on every red carpet she steps on, is about to take ISIS to task for the genocide and sexual enslavement of thousands of Yazidi women.

According to the New York Times, the human rights lawyer will represent ISIS survivor and Nobel Peace Prize nominee Nadia Murad, who was kidnapped by ISIS in 2014 and escaped three months later after enduring terrible acts of torture and rape. In addition to Murad, ISIS kidnapped thousands of Yazidi women from Northern Iraq and forced them into camps, sexually brutalizing them as punishment for belonging to a religious minority.

Clooney's involvement is a major triumph for the victims of the Yazidi genocide, whose captors have not yet been held accountable and punished for their crimes. She plans to seek an International Criminal Court investigation, and said in a statement to Women in the World:

"The European Parliament, the Parliamentary Assembly of the Council of Europe, the U.S. government and the U.K. House of Commons have all recognized that there is a genocide being perpetrated by IS against the Yazidis in Iraq. How can it be that the most serious crimes known to humanity are being carried out before our eyes but are not being prosecuted by the International Criminal Court in The Hague?"

This is hardly the first time Clooney has stood up for women and human rights, writ large—she launched a scholarship for Lebanese women in 2015 and has campaigned to prevent extremism in the Maldives. George Clooney is one lucky guy—and thank god, he knows it.