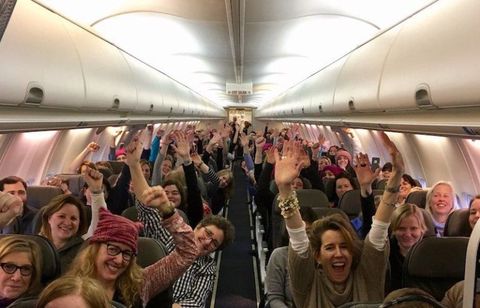 Today's transfer of power has been a bitter pill for many Americans to swallow. The country was deeply divided by the 2016 election and some of Trump's first acts in office (like his mysterious executive order about Obamacare) aren't easing the worries of his opponents. But one group of women found a little bit of happy tonight when they realized their entire flight to D.C. for the Women's March on Washington tomorrow was filled with other women.

Once the women onboard realized the ~magic~ that was happening, they celebrated—with lots of in-flight wine.

Friedman did acknowledge that her #AllLadyPlane was mostly white women, but said she hopes tomorrow's march on Washington will be more diverse:

Kayleigh Roberts Kayleigh Roberts is the weekend editor at Marie Claire, covering celebrity and entertainment news, from actual royals like Kate Middleton and Meghan Markle to Hollywood royalty, like Katie Holmes and Chrissy Teigen.
Advertisement - Continue Reading Below
More From Culture
Treat Yourself to a Chick Flick Tonight
Who Will Be on 'Bachelor in Paradise' in 2020?
Advertisement - Continue Reading Below
An Investigation Into the Next 'Bachelorette'
'The Bachelor' Has Already Finished His Season
Can We Talk About Kelly's Mom From Love Is Blind?
The Best Reactions to the 'Love Is Blind' Finale
Hilary Duff Hints About 'Lizzie McGuire' Reboot
Ryan Murphy's Producing a Love Letter to Hollywood
This Is When the 'Love Is Blind' Finale Will Drop
Will Gigi and Damian Actually Get Married?