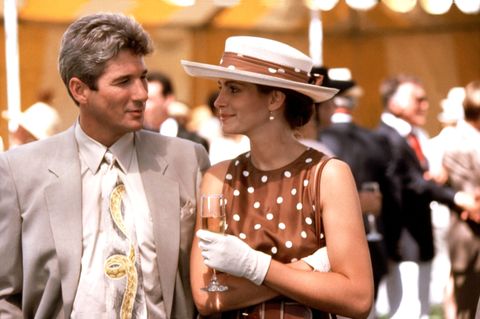 Pretty Woman tells the classic story of a man who meets a prostitute, falls in love, and lives happily ever after. (Seriously—classic.) Except, the movie almost went a very different (and super dark) direction. First of all, let's revisit the last few moments of Pretty Woman.

Cute, right? Right! But turns out Julia Roberts' character was originally meant to overdose on drugs and die. Which, 😱.

"I can't tell you how much time was spent debating," former Walt Disney Studios chairman Jeffrey Katzenberg said during a Q&A at Hearst Tower, AKA Marie Claire HQ. "As a script, Pretty Woman was an R-rated movie about a hooker on Hollywood Boulevard. By the way, in the original version—it's pretty dark—I think she died of an overdose."

Um, wow. Thank goodness the studio changed their minds, because otherwise this movie would be a huge bummer. Actually, in the event that you're feeling sad just thinking about it, here's a GIF to cheer you up.