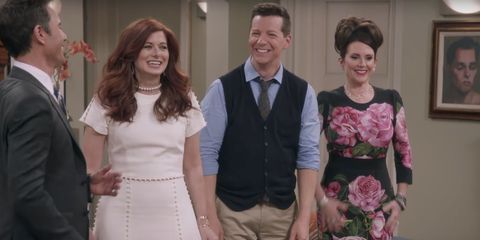 The announcement that Will & Graceis coming back to NBC has fans understandably excited. One of the reasons this revival is so great is that the entire cast seems to be enjoying every moment of their time together. And the new Will & Grace teaser trailer hints that the cast might be doing... a musical?!

The clip, which really is a teaser, shows candid footage of the famous four laughing and holding hands. Megan Mullally is back in character as Karen, with her trademark, bouffant hair, and Debra Messing's Grace is wearing the cutest baby pink dress. Then, a member of the crew holds up a clapper board in front of the camera which reads, "Will & Grace Musical".

Does this mean that there will be a musical episode of Will & Grace? Are the cast recording a special promo video in song? I have so many questions that need answering right now!

But regardless of whether Will, Grace, Karen, and Jack break into song, it's fun to see them reunited once again.

Amy Mackelden Weekend Editor Amy Mackelden is the Weekend Editor at HarpersBAZAAR.com, where she writes about entertainment, celebrity news, beauty, and fashion.
Advertisement - Continue Reading Below
More From Culture
Jennifer Lawrence Will Star In a Netflix Film
Who From Bachelor Nation Will Be on the 'Games'?
Advertisement - Continue Reading Below
The Best Romantic Films of the Year (So Far)
An Investigation Into the Next 'Bachelorette'
Mindy Kaling & Priyanka Chopra Team Up
How the 'To All the Boys 2' Soundtrack Was Made
Does 'Bachelor's Madison Prewett Self-Eliminate?
How Much Does 'The Bachelor' Make?
Tales of a Hollywood Con Queen
Who Will Be on 'Bachelor in Paradise' in 2020?