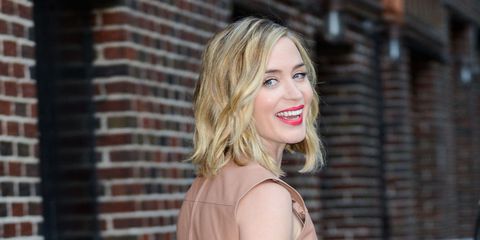 Great news for fans of Mary Poppins. Mary Poppins Returns is happening, and Disney has finally released a teaser for the live-action reboot. At D23, Disney's three day biennial convention, attendees got their first look at Emily Blunt as Mary Poppins, and they weren't disappointed.

We've already seen the cast in photos in that Entertainment Weekly spread, and gotten a sneak peek at Blunt and Lin-Manuel Miranda filming in front of Buckingham Palace in England. But that's nothing compared to footage that was revealed yesterday.

"Kids fly their kite and Mary emerges from the clouds as the wind picks up," E! News reported.

"She is also shown inside a house, pulling an umbrella out of a sink and appearing with flying objects. Lin-Manuel Miranda is seen dancing with a ladder as a chimney sweep. Emily Mortimer of The Newsroom fame plays an adult Jane Banks. In the teaser, her character says, 'Those things didn't really happen.'"

Disney also revealed an animated poster of Blunt's incarnation of Mary Poppins, which shows her posing in front of the London skyline. Blunt looks happy to be playing the iconic character, and is sure to give an incredible performance in the sequel.

Finally, the release date was confirmed as being Christmas Day 2018, which means we've got almost 18 months to wait.