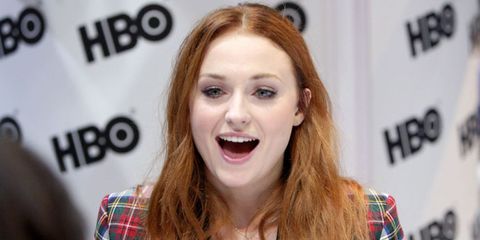 Game of Thrones has been a staple of San Diego Comic-Con for the better part of a decade now. Even though the cast of the HBO mega-hit are Comic-Con veterans at this point, this year's panel was different. Usually, Thrones seasons wrap up in June—before SDCC. This year, the show premiered later than usual (in July instead of its typical April), meaning the cast had the chance to hint at spoilers for this season.

And hint they did. Here are seven of the biggest hints, clues, and outright reveals from the Game of Thrones panel at San Diego Comic-Con.

Panel host (and GOT alum) Kristian Nairn kicked things off right—by asking Gwendoline Christie about the flirtation between Tormund and Brienne. And she didn't rule it out.

While she admitted that Brienne feels mostly awkward about Tormund's advances, she slyly added that, "underneath any awkwardness is always a potential secret enjoyment."

2. It's not your imagination—Grey Worm and Missandei are definitely a thing.

Jacob Anderson, who plays Unsullied leader Grey Worm, confirmed that there's definitely something there between his character and Missandei, Daenerys' translator/BFF. There's so much there, in fact, that he could see a wedding in their future, possibly officiated by Dany herself.

Even though she admits Littlefinger was manipulating Sansa in the beginning, Sophie Turner says her character has grown very wise over time and even hinted that Sansa might be engaging in some Littlefinger-esque manipulations of her own this season.

"She's just as good at playing the game as he is at this point," she teased.

Even though she killed his BFF, Shireen, and he demanded justice, Liam Cunningham says he couldn't see his character actively going after Melisandre for revenge—which means he probably doesn't do that this season (unless Cunningham is an amazing liar).

While he said he could see Davos taking Melisandre out if the perfect opportunity presented itself, he didn't think the Onion Knight would track her down on purpose.

5. Sansa knows how to "play the game of thrones."

In a particularly interesting moment, Sophie Turner quoted an early Cersei line while talking about how Sansa has changed since Season 1.

"She's woke now guys, she's real woke," Turner joked, adding, "She's cautious, she trusts no one—whether it be man or woman, whether a family member or not, she trusts no one and I think that's important when you play the game of thrones."

This seems like yet another clue that Sansa is channeling Cersei this season.

6. Sam will travel North and reunite with Jon Snow.

John Bradley, who plays Samwell, basically said this one directly. After explaining Jon's influence on Sam, he explained how that's impacted where Sam is now—and where he has to go next:

"He wants to stand shoulder-to-shoulder with Jon Snow in the great war, but he knows that he can't do that on the battlefield. He knows that he has to do that using his very unique set of skills, which is academia and learning and applying knowledge. The citadel is his battlefield. And so Jon sent him there and now he has the responsibility to make Jon's faith in him justified and get Jon results. He knows it's a race against time. He needs to get in there, find out whatever piece of information he needs to find out, and get back up to the North and give it to Jon Snow."

So it looks like Jon and Sam will be reunited. Here's hoping Sam remembers to bring that Valyrian steel sword with him.

7. Melisandre's next move is to meet with Dany.

HBO released a new trailer at Comic-Con that ends with a brief, but impactful exchange between Daenerys and Melisandre. Get. Ready.

"If we don't band together we will die."
Watch the #GoTS7 "Weeks Ahead Preview" released in Hall H at #SDCC2017. #GoTSDCC #GameofThrones pic.twitter.com/VdXMwF7R1n

Kayleigh Roberts Kayleigh Roberts is the weekend editor at Marie Claire, covering celebrity and entertainment news, from actual royals like Kate Middleton and Meghan Markle to Hollywood royalty, like Katie Holmes and Chrissy Teigen.
Advertisement - Continue Reading Below
More From Culture
Who Will Be on 'Bachelor in Paradise' in 2020?
When Will 'The Bachelor' Women Tell All Air?
Advertisement - Continue Reading Below
'The Bachelor' Has Already Finished His Season
The 83 Very Best Rom-Coms of All Time, Ranked
An Investigation Into the Next 'Bachelorette'
The Best Korean Dramas to Get You Hooked
Who Is 'Bachelor' Contestant Victoria Fuller?
Everything to Know About Peter Weber's Ex
Read an Excerpt From the Uber Whistleblower's Book
The Must-Watch TV Shows of 2020