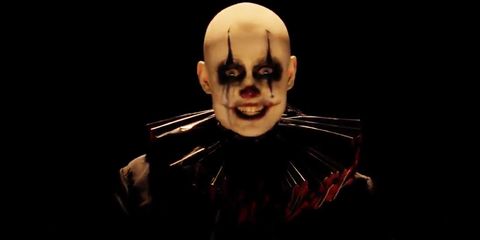 American Horror Story: Cult premieres in just over two weeks, and as the new series approaches, the promo clips keep on getting creepier. Co-creator Ryan Murphy previously revealed that Season 7 of AHS will focus on 2016's election campaign between Donald Trump and Hillary Clinton, and the visuals so far have been truly terrifying, which seems fitting.

The latest trailer for the new season is a cacophony of scary sound effects, and visuals that you might expect to find in a Saw movie. While there's not a politician in sight, every image that appears onscreen is grotesque. From rats and giant spiders, to hoards of cult-like clowns moving in unison, AHS: Cult is aiming to shock and repulse. Watch the latest trailer at your own risk:

Amy Mackelden Weekend Editor Amy Mackelden is the Weekend Editor at HarpersBAZAAR.com, where she writes about entertainment, celebrity news, beauty, and fashion.
This content is created and maintained by a third party, and imported onto this page to help users provide their email addresses. You may be able to find more information about this and similar content at piano.io
Advertisement - Continue Reading Below
More From Culture
The Sexiest New Movies of the Year
A Look Back at Princess Anne's Life in Photos
Advertisement - Continue Reading Below
Where Is the Cast of 'Gilmore Girls' Now?
'The Bachelor' Is Back!
Who Is "Queen" Victoria on 'The Bachelor'?
Matt James' 'Bachelor' Cast: Everything We Know
Get to Know Serena Pitt From 'The Bachelor'
The Best Lesbian Movies Streaming on Netflix
Listen to the Best New Love Songs of 2021 (So Far)
Who Is Christine Chiu on Netflix's 'Bling Empire'?