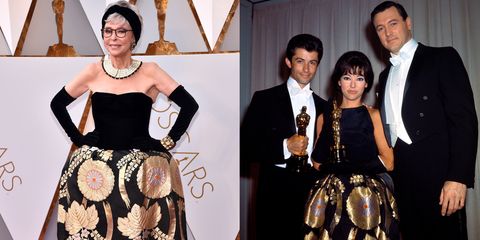 Going vintage on the red carpet is always an interesting move, but Rita Moreno just took it to the next level. The actress, who is presenting at the Academy Awards tonight, just walked the red carpet wearing the same exact dress she wore to the Oscars in 1962.

It's the dress she wore when she took home the Best Supporting Actress award for her performance in West Side Story.

During a red carpet interview with E!'s Ryan Seacrest, Moreno revealed that the dress, which is in immaculate condition, has been hanging in her closet since the 1962 Oscars. The dress was made in Manila in the Philippines, where she was just before the Academy Awards (she says she flew in on the off chance she won, but felt sure the award would go to her fellow nominee Judy Garland).

The dress and Moreno both look just as amazing tonight as they did in 1962.

This content is created and maintained by a third party, and imported onto this page to help users provide their email addresses. You may be able to find more information about this and similar content at piano.io
Advertisement - Continue Reading Below
More From Fashion
Refreshing Ways to Style a Cardigan
The Foolproof Guide to Cleaning Your Jewelry
Advertisement - Continue Reading Below
Nordstrom's 2021 Anniversary Sale Is the Best Yet
Hats That Will Make a Statement—In a Good Way
The Most Exciting Jewelry Trends for Fall 2021
Maxi Dresses That Work for Every Occassion
The 100 Best Shopping Sites to Browse Through
The Perfect Vests for Layering
How to Make White Sneakers Look Brand New
Colors of Fall You're About to See Everywhere